EU DisinfoLab developed a system for monitoring disinformation based on an identified ecosystem rather than on a series of keywords. They tested it on the 2018 Italian general elections 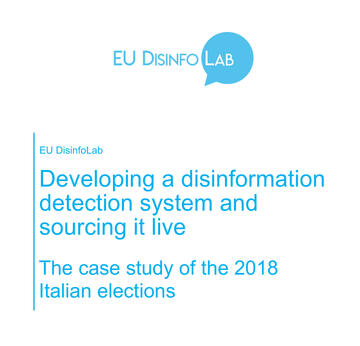 There are different approaches to research on disinformation (a term here preferred to “fake news”). EU DisinfoLab chose to try to detect them by combining content analysis with network analysis through the use of semantic tools and machine learning.

The researchers developed a system for monitoring disinformation content based on an identified ecosystem rather than on a series of keywords. The purpose of this monitoring process was to expose misinformation networks in real time, and to contribute to raising awareness amongst the population about the issue. After a pilot project with the 2017 French elections, they tested it on the 2018 Italian general elections.

The methodology consisted in five steps. First, researchers selected four Twitter accounts spreading pro-Russian narratives in Italy (Russia Beyond, L’antiDiplomatico, the Russian Embassy in Italy, and the Italian-language account of Russian media outlet Sputnik). Then they looked at the followers of these accounts, analysed how they were following each other, and identified three main communities: the anti-Euro community, the main M5S community, and an extreme-right community. Then they started the monitoring, and put up a system that notified them every time the same content was shared at least 3 times within the ecosystem. They then adapted the monitoring and integrated it with notifications by their network and partners. They managed the alerts classifying the content, and analysed interactions to find the source of the (accurate) alerts.

As a result of the work between December 17th, 2017 and March 4th, 2018, they analysed 171 pieces of news, mostly from mainstream media outlets, but also some from pro-Russian and anti-European sources. Among them, 29 were identified as misleading content, 13 as false connection, 11 as manipulated content and 1 as completely false content (total 54). Other news were accurate (100) or expressed opinion (18). The disinformation content concerned Italian elections, Italian economy, and anti-migrant and anti-EU narratives.  The chronology of the dissemination of the specific narratives shows a relation with two incidents: the killing of Pamela Mastropietro and the shooting in Macerata.

The paper presents two examples of real time-sourced news: the “Trenitalia case” (a false claim about a migrant travelling on a Frecciarossa without a valid ticket) and the “Sicilian ballots case” (the most shared fake news in the election period, claiming that 500,000 ballot sheets pre-compiled with a vote for the Democratic Party).

The research did not provide evidence of foreign actors meddling with the Italian elections. The (few) disinformation examples were disseminated by local sources, often with some link to Italian political parties. Local partnerships were necessary and useful both for finding alerts and for spreading debunking. The authors highlight some problems. Most of the content spotted through the alerts was not pure disinformation, but rather disinformation. Also, the research could not study Facebook, even if it is more used by the Italian public, because of lack of data access.