Strategies, challenges and specificities of digital-born news media in Europe are in focus in this report by the Reuters Institute for Journalism 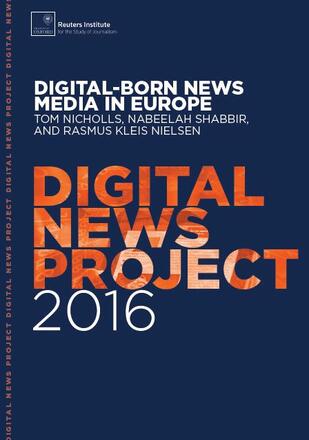 The report provides an analysis of the current dynamics and situation among media outlets that have been established solely on digital platform in Europe. It sheds light on differences among digital-born news media formats themselves and compares them to the longer established “legacy” media players.

The three authors interviewed 21 representatives from 12 different digital-born news outlets based in the UK, France, Spain and Germany. From each country, three media actors were chosen to represent different funding and distribution models as well as different editorial strategies. All of them had to fit the criteria of providing news and public affairs-related content.

Besides the introduction and the conclusion, the report is divided into three main chapters. The first chapter is dedicated to analysing three different funding strategies: (native) advertising, subscription, donations and various pay models maintain challenging aspects for both news media models.

The subsequent chapter describes the distribution strategies of the digital media outlets surveyed. A challenge identified by the report is the risk of becoming too dependent on social media and search engines, a risk-factor impacting equally on digital-born media and legacy news media.

The third angle from which the report studies digital news media is their editorial strategies. It has found that “some seek to provide outstanding, in-depth journalism and investigative reporting on a few issues, while others cover a much broader range of topics but aim to develop a tone and voice that help differentiate them from other general interest news sites.”

Key conclusion highlighted in the report include:

“Strikingly, domestic digital-born news media seem stronger in those countries – like France and Spain – where legacy media are weaker, not in those – like Germany and the UK – where the digital media market is most developed.”

Digital-born news media do not attempt to revolutionize journalism but to reform it by using contemporary technologies. While some come close to “legacy” news media in terms of reach, editorial resources and revenues, most operate on a more limited scale.

Digital-born news media have a clear commitment to a vision of quality journalism. This perhaps correlates with the fact that almost all the cases investigated were launched by experienced journalists who have spent most of their careers in “legacy” news media.

“Unlike US digital-born players, European organisations tend to bear more similarity to traditional media, are strategically similar to their legacy counterparts. Interesting journalism is being done, but the funding models, distribution and editorial strategy is not markedly different from the digital strategy of legacy organisations, reflecting European digital-born news media’s roots in journalism, rather than business or technology.

“Digital-born News Media” is part of the Digital News Project initiated by the Reuters Institute for the Study of Journalism.