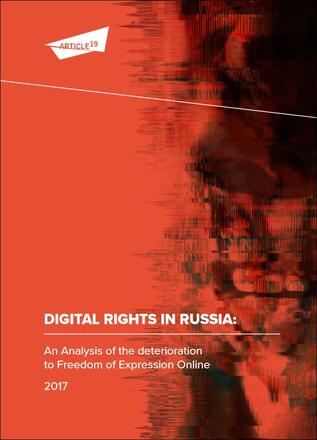 International indices consistently rank Russia close to the bottom for freedom of expression, with online violations playing a significant role in these assessments: 52nd of 65 in the Freedom House Internet Freedom Table and 148th in the 2016 Press Freedom Index prepared by Reporters Without Borders. In this report, Article 19 highlights how the Russian government is curtailing freedom of expression online, seeking to control what is said and published on the Internet through restrictive legislation, surveillance and criminal prosecutions of online dissent.

Restrictions on digital rights in Russia intensified following large scale public demonstrations in 2011-12. The largest of their kind since Vladimir Putin came to power, the protests were sparked by reports of mass electoral fraud disseminated online by election observers and were largely organised using online social networks. This confirmed authorities’ fears that the Internet posed a threat to government power, precipitating significant changes to the legal and regulatory framework governing the Internet in Russia, aimed at preventing it from providing a platform for dissent.

The study focuses on five case studies to highlight the strategies through which the right to freedom of expression is being violated online in Russia.

The first case study looks at the blocking of websites calling for an electoral boycott in September 2016. It explores how a series of amendments to Federal Law 149-FZ on Information, IT Technologies and Protection of Information have enabled the blocking of online content without a court decision. Millions of other websites have been blocked without judicial oversight, many for their expression of critical views directed towards the government.

The second case study considers the abuse of anti-extremism legislation to curb political dissent online, examining the high-profile case of Anton Nossik, an Internet expert and opposition activist, who was ordered to pay a substantial fine having been found guilty of incitement to hatred for an online post.

The third case study presents how Russia’s biggest social network, VKontakte, openly works with the security services to limit dissent. Vkontake provides personal information to authorities regardless of the legitimacy of the requests and without transparency of the process. This facilitates the application of arbitrary criminal charges, encouraging self-censorship on social media.

The fourth case study explores allegations that Kremlin-paid trolls are exploiting Facebook community rules in order to silence voices critical of the Russian government. Journalists and activists who have expressed views critical of the government have had accounts suspended after being unfairly accused of violating community standards.

Finally, the fifth case study looks at the blocking of LinkedIn in Russia, for failing to comply with Federal Law 242-FZ, the so-called ‘Personal Data Localisation’ Law. This requires any web service processing Russian citizens personal data to store this information on database servers located within the territory of the Russian Federation, providing Russian authorities with easier access to Internet users’ personal data.

(Text adapted from the Introduction to the report by Article 19)