Discourse in danger. Attacks on free expression in Putin's Russia

The report “Discourse in danger. Attacks on free expression in Putin's Russia” illustrates the increasing effort by the Russian government to shape the information space, from the Internet, to children’s literature, to any independent cultural spaces, including theater and academia 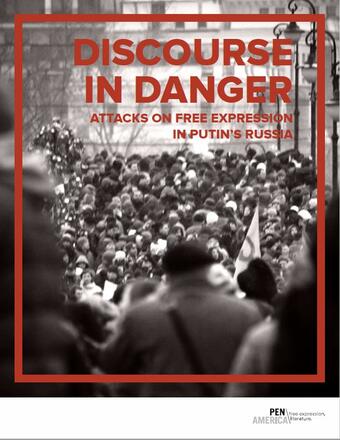 The report “Discourse in danger. Attack on free expression in Putin’s Russia”, published by PEN American Centre in 2016, investigates the worsening climate for free expression in Russia in several spheres, including the Internet, children’s literature, cultural institutions and non-governmental organisations.

A whole section of the report is dedicated to the Federal Service for Supervision of Communications, Information Technology, and Mass Media - the Roskomnadzor, which is the federal executive authority responsible for the control and supervision of the information space, from mass media to Internet and telecommunications. The report explains how the Roskomnadzor has taken an increasingly powerful role in controlling the Russian media landscape, also by means of a selective, sometimes arbitrary, enforcement which is frequently open to political influence. "The result is an arbitrary and unpredictable approach that leaves content producers guessing what may get them fined or jailed", leading to self-censorship as a way to avoid uncertain rules and arbitrary enforcement, the report explains.

The government effort in controlling the information space is not only limited to restricting pluralism of views and independent voices, but also filling it with an onslaught of government-approved news, propaganda and misinformation which aims at promoting a conservative culture of patriotism, orthodoxy and authoritarianism. The conflict in Ukraine further amplified such effort, leading to an increase of politically motivated censorship and propaganda, which is - according to the authors, unprecedented in recent Russian history.

The Kremlin’s policy to control public discourse goes beyond the information sphere and affects also the sector of traditional publishing, in particular children literature, and the broader cultural, intellectual and social spaces, including theater, museums, academia, independent cultural institutions and civil society, non-governmental and human rights organisations that are often forced to restrict their activity and operate under the constant risk of administrative sanctions or even closure.

The report is based on a review of news and analytical reports on freedom of expression in Russia as well as phone, Skype, and e-mail interviews with human rights experts, writers, journalists, and publishers working in Russia. It presents a wide range of cases and first-hand experiences of independent media practitioners and cultural operators.