This is the final report of an inquiry by the Digital, Culture, Media, and Sport (DCMS) Committee of the British House of Commons into Disinformation and 'fake news', which started in September 2017. In November 2018, representatives from eight countries (Argentina, Belgium, Brazil, Canada, France, Ireland, Latvia, and Singapore) joined the DCMS Committee to form an International Grand Committee 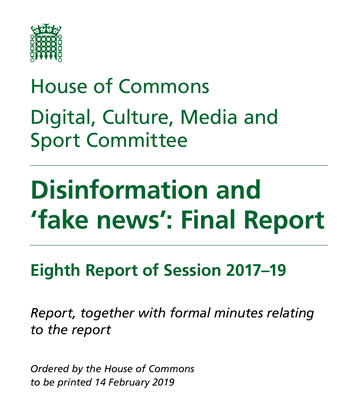 While the British Government has adopted one of the recommendations made in the Interim Report (published in July 2018) and has started using the terms “disinformation” and “misinformation” instead of “fake news”, many others were not substantively addressed, including the creation of a new legal category for social media company different from both platform and publisher.

The Committee recommends that inferred data should be as protected under the law as personal information. It is also recommended that a new independent regulator for tech companies should be established and the powers of the ICO should be increased.

Three Facebook senior managers were informed of the Cambridge Analytica breach before it was reported by the Guardian, but they did not inform Mark Zuckerberg: the Committee considers this evidence that Facebook did not treat the breach seriously enough. The scandal was possible because Facebook had not fully complied with a 2011 settlement with the US Federal Trade Commission (FTC).

Mark Zuckerberg was invited to provide evidence to the Committee but refused. However, the Committee was able to obtain some Facebook internal documents from tech company Six4Three. Such documents revealed details on the “whitelisting agreements” by which Facebook grants certain apps (e.g. AirBnB and Netflix) full access to friend data without user permission. Facebook's strategy includes making developers pay substantial amounts of money for preferential access and the use of “reciprocity” for the sharing of data with apps on the Facebook platform. Facebook has also been collecting call logs from Android customers. In 2013, it bought Onavo and used it to make market analysis on the use of other apps: as this is a violation of its guidelines, Apple removed it from the App Store in 2018. It similarly removed Facebook Research in January 2019.

Facebook has carried out several acquisitions (including Instagram and WhatsApp) and has targeted competitors. When Twitter launched Vine in 2013, Facebook shut down their friends API access, which allowed to find friends via FB. Vine, which was later discontinued, was a competitor of Instagram Video. Facebook’s behaviour poses a competition problem. The Committee goes on to argue that “Companies like Facebook should not be allowed to behave like ‘digital gangsters’ in the online world, considering themselves to be ahead of and beyond the law”.

Eldon Insurance and pro-Brexit campaign group Leave.EU were fined by the ICO because they shared personal data in breach of current laws. Arron Banks and Andy Wigmore gave misleading evidence to the Committee. According to files obtained by the Committee, there were data exchanges between SCL/Cambridge Analytica and Canada-based AggregateIQ (AIQ), that held data insecurely. Vote Leave ran a competition with a £50 million prize for predicting the results of the European football championships, to gather data from people who usually ignore politics.

Pro-Brexit website Mainstream Network spent about £257,000 in Facebook advertisement, but is run anonymously, possibly in breach of GDPR and electoral rules. Facebook has not provided the additional information it promised. Scotland-based Constitutional Research Council (CRC) donated £435,000 to the Democratic Unionist Party in Northern Ireland, thus exploiting a loophole in the electoral law that enabled them to avoid having to disclose the source of the money. That should be fixed. According to the Committee, Facebook’s Simon Milner and Mike Schroepfer have either deliberately misled them or they were deliberately not briefed by senior executives at Facebook about the extent of Russian interference in foreign elections. Arron Banks donated £8.4 millions to the Brexit campaign, but questions remain as to the origins of the money. An investigation is ongoing. Current rules forbid funding from abroad in UK elections but not -explicitly- overseas spending. The Committee calls for a review. Social media companies should take action against information operations and similar actions.

Strategic Communications Laboratories (SCL) and it subsidiary Cambridge Analytica have gone into administration, but other companies (such as Emerdata) are doing the same work. Regulation is needed for strategic communications industry.

There is the need for greater digital literacy among social media user. So-called “friction” should be incorporated in order give people more time for thought.