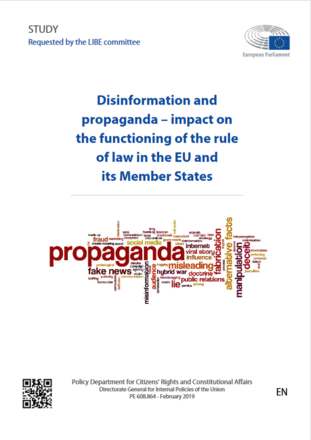 The study examines effects of disinformation on the functioning of the rule of law, democracy and fundamental rights in the EU and its Member States.

It also formulates recommendations on how to tackle this threat to human rights, democracy and the rule of law. It specifically addresses the role of social media platform providers in this regard.

Starting from the research on ‘post-truth’ media in general, the authors have narrowed the focus by omitting diffuse misinformation, conspiracy theories and unpaid trolling, as well as offline propaganda and hate speech. The discussed disinformation could originate either from governmental forces or non-state actors, whether domestic or foreign.

Elements of disinformation and propaganda are that such information

To develop an appropriate definition and terminology for what is often called ‘fake news’, resources in the field of communication studies, political science, internet policy, law and behavioural studies have been critically assessed.

The impact of disinformation and propaganda on human rights is divided in two main categories: (1) impact on data protection, privacy, human dignity and autonomy; and (2) violation of the rights of freedom of expression and the right to seek and receive information.

Given the cross-border dimension of the problems addressed, the recommended measures need to be adopted at the EU level in order to achieve the objectives. Recommendations are divided into two main branches: strengthening democratic resilience and media policy.