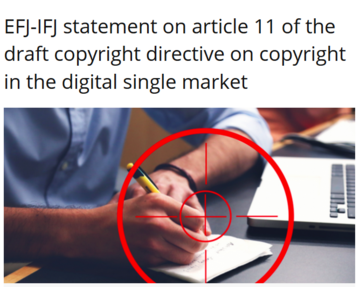 The proposal by the European Commission for a directive on copyright in the digital single market was presented in September 2016. The draft is currently making its way through the European Parliament and Council. The proposal has sparked a number of criticisms, including concerns on the protection of journalists authors' rights. EFJ and IFJ formulate their concerns as follows:

Journalists’ contributions to press publications and informing citizens must be recognized and duly protected and remunerated. Their authors’ rights, namely their economic and moral rights, including the right to integrity and paternity, must be duly acknowledged.

Freedom of contracts too often results in contractual arrangements where journalists are forced to sign away their rights. These so-called buy-out contracts should be outlawed and there shall be no presumption of transfer of rights from journalists to publishers.

If there is such a right, member states must ensure that its holders cannot act as “gatekeepers” that prevent journalists (those who didn’t sign buy-out clauses) from authorizing the re-use of their content.

The Federations believe that a publishers’ right can contribute to fight massive reproduction of journalistic works providing it is managed by collecting societies representing both journalists and publishers and journalists are guaranteed to receive a fair share of the revenues stemming from the exploitation of this right.

Such mechanism would ensure that both journalists’ and publishers’ interests are duly taken into account.