ERGA Report on the independence of National Regulatory Authorieties

The report provides recommendations on the characteristics of the independent regulatory authorities, providing elements to be taken into consideration by the Commission in the review of the AVMSD 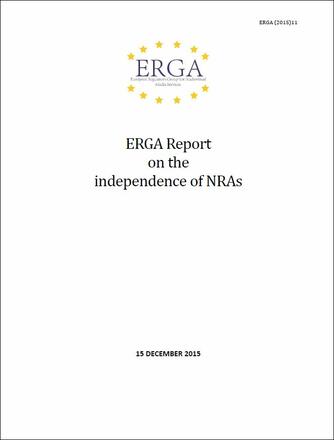 The Report focuses on different national institutional set ups regulating the work of National Regulatory Authorities (NRAs) in the field of Audiovisual Media Services (AVMS), with the aim to assess the elements impacting on the effectiveness of NRAs' independence. The study is based on a questionnaire answered by 33 NRAs across Europe.

The structure of the report takes into account the provisions enshrinedin the European framework which are relevant for the NRAs’ independence. It then considers the impact of national institutional frameworks on the functioning of NRA. Further on, the appointment procedures are considered, as well as the endowment of human resources, financial autonomy, transparency and accountability as elements impacting on NRAs functioning and effective independence. Finally, the decision making process and enforcement capacity are considered.

Recommendations expressed in the report stress:

- the need to guarantee the independence of these NRAs

- the key role of transparency as a guiding principle in NRAs activities, as well as the need to guarantee NRAs the power to take autonomous, independent decisions and to be entrusted with adequate enforcement powers

The concept of independence of regulators is pursued in the audiovisual sector by article 30 of the 2010/13/EU Directive on Audiovisual Media Services (AVMSD). The report recognizes existing differences in constitutional systems in the EU, and the variety of institutional and organizational set-ups among the audiovisual regulators of the Member States, while at the same time recalling that the independence of regulatory bodies in the communications sectors is key to their effectiveness.