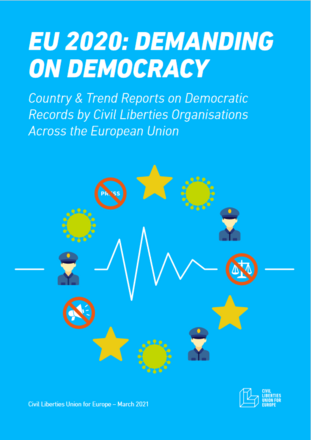 The report covers 14 EU countries. It is the most in depth exercise of this kind by an NGO network covering developments in 2020. The report was prepared by Liberties together with its member and partner organisations , to feed this year’s consultation by the European Commission on the state of the rule of law in the EU.

The key finding of this report is that democracy and the rule of law have regressed across a large number of European countries in 2020.

Some countries with otherwise serious failings, like the Czech Republic, Slovakia and Romania, are considering reforms that could potentially result in some improvements. Overall, the report points to a number of alarming trends common to many EU countries, including some with traditionally strong democratic records. And authoritarian governments in Hungary , Poland and Slovenia have used the pandemic as a pretext to intensify their efforts to dismantle democratic standards.

There is rising political pressure on media freedom. The situation is particularly worrying in the Czech Republic, Hungary, Poland and Slovenia. For example, in Slovenia journalists are routinely threatened and subject to smear campaigns.

Corporations and governments are also increasingly trying to prevent investigations and campaigning by journalists and activists by abusing the legal system, through Strategic Lawsuits Against Public Participation (SLAPPs). The problem is on the rise in many countries including Croatia, Italy and Slovenia.

Some governments are also using criminal law to clamp down on free speech. For example, activists and artists in Spain have been prosecuted for publishing satirical cartoons, burning a flag or making a provocative use of religious symbols during a protest.

The COVID-19 pandemic has undoubtedly played a part in the weakening of the rule of law. Measures taken to address the outbreak have affected democracy and rights across the EU. People’s freedoms have been curtailed in a bid to stop the spread of the virus.