The EU engaged in activities across the globe in line with the EU Action Plan on Human Rights and Democracy (2015-2019). Focusing on a number of thematic issues, this report provides a snapshot of this commitment

Publication Date: May 2019
Research and Editorial Team: Council of the European Union
Link: EU Annual Report on Human Rights and Democracy in the World 2018 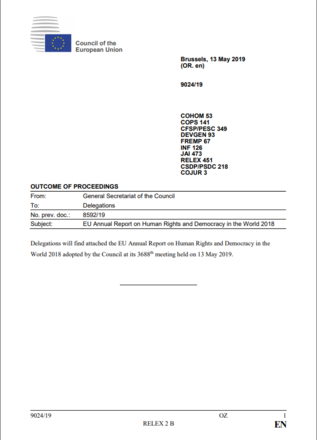 In 2018, the EU remained at the forefront of the protection and promotion of human rights by committing to the EU Action Plan on Human Rights and Democracy (2015-2019). The EU's worldwide engagement creates global resonance on the issue, strengthening the awareness that a multilateral response is needed and leading the way for positive change.

The report is divided into thematic issues, using country-specific examples.

FOCUS ON FREEDOM OF EXPRESSION AND MEDIA FREEDOM

According to the 2018 World Press Freedom Index issued by Reporters without Borders, the trend is a decline in press freedom worldwide, with Europe being the safest region but witnessing the worst drop. Thus, the EU continued to commit to the EU Action Plan on Human Rights and Democracy and to the EU Human Rights Guidelines on Freedom of Expression Online and Offline. In line with Junker’s statement, according to which Europe must always be a place where freedom of the press is sacred, the Commission assessed freedom of expression as part of the enlargement package and provided financial support to protect and promote it.

In particular, the EU issued declarations opposing limits to freedom of expression, calling states to reinforce preventive measures and to align their legislation with the relevant international conventions. Also, the EEAS set up task forces to address communication challenges (in the Eastern Partnership, the MENA region, and the Western Balkans), with the aim to support a better media environment, address disinformation, and develop campaigns on explaining EU policies. Additionally, the EU provides financial support for projects and activities on the field, through funding mechanisms and programmes such as the “ProtectDefenders.eu”, “Media4Democracy”, the Instrument for Pre-accession Assistance in the Western Balkans, and other bilateral cooperation envelopes.

Acknowledging that media freedom and pluralism are under threat also within Europe, the Commission continued to fund projects both in member states and in candidate countries, including the European Centre for Press and Media Freedom (which provides legal assistance to journalists under threat), the Index on Censorship, which created the “Mapping Media Freedom”, the International Press Institute, and the Media Pluralism Monitor. The EU also works on improving and implementing new laws and directives to guarantee the protection of personal data as well as of freedom of expression and for whistle-blowers. In particular, in May the General Data Protection Regulation (GDPR) became applicable, obliging EU Member States to reconcile the right to the protection of personal data with the right to freedom of expression and information. Also, the 2018 evaluation of the implementation of the ‘Code of conduct on countering illegal hate speech online’ showed considerable progress.

Finally, the Commission addressed the problem of online disinformation, outlining a number of actions to counter its spread proposing, for example, a self-regulatory Code of Practice on Disinformation for online platforms and the advertising sector.