How EU can face Russian rhetoric and IS propaganda? A report from the Polish Institue of International Affairs 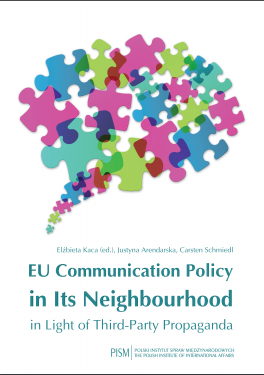 This report by the Polish Institute for International Affairs contributes to the discussions for the implementation of the EU action plan for media. The EU action plan will revise the current communication tools and support for freedom of media used in the neighbourhood countries, facing both Russia and the Islamic State (IS) propaganda.

The report argues that so far, the EU’s response to these third-party propagandas has been incomplete and it has not taken advantage of all available means. Consequently, the report suggests various ways to strengthen EU communication strategies.

Russian aggression to Ukraine, the annexation of Crimea, and Russian military involvement in the war in Donbas, as well as the rising threat of the IS to the EU’s south are factors that have persuaded the Union to reconsider its neighbourhood public diplomacy. Both actors use enhanced propaganda strategies, which are challenging to answer, although differing in nature and in the tools involved.

The disinformation campaigns led by Russia and by the Islamic State (IS) in the EU’s neighbourhood have made the bloc EU rethinking of its response to such threats. Both these actors aim to challenge and discredit Western values and turn the EU neighbours’ societies to their own purposes, either the recruitment of new regime supporters (IS), or drawing these countries into own sphere of economic and political influence (Russia). The EU has already undertaken steps to counter the Russian propaganda and will address that of IS in the near future as part of its strategy on countering hybrid threats. So far, the Member States have agreed to enhance strategic communication and the European External Action Service (EEAS) has created a task force, the so-called Eastern Strategic Communications (East StratCom), responsible for myth-busting false stories and propaganda disseminated by Moscow. These are positive steps as they put the EU on a permanent basis of researching and countering Russian disinformation campaigns. Nevertheless, according to the report the scope of the new task force’s actions is severely limited by the lack of a sufficient budget and the service’s advisory role for other EU units responsible for communication.

The common point between both actors’ disinformation campaigns is building up a black and white picture of the world, but also one full of uncertainty, where the existence of an enemy (the West) is central in order to blame it for all faults. Facts are easily manipulated and conspiracy theories are in wide use. For both the IS and Russia, media are a weapon to use.

This report examines the nature of Russia’s disinformation campaigns, focusing on tools of Russian rhetoric and Islamic States propaganda. Subsequently the authors formulate some recommendations suggesting responses to the new threats. The report underlines the very limited financial resources that have been spent in recent years on supporting freedom of media in the European Neighbourhood Policy (ENP) countries. The authors conclude “in terms of substance, a better image of the EU should not be promoted by imposing an EU perspective of politics” but “emphasizing fact-checked information about EU” and improving new communication strategies.