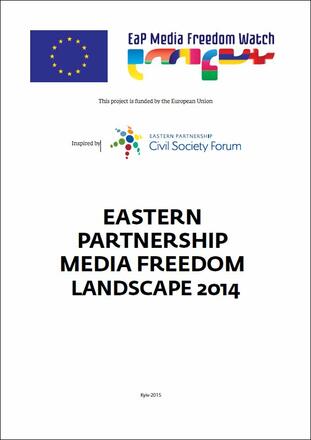 Each of the 6 country-based reports takes into consideration the legislative framework, the implementation level as well as case law elaborated during the considered period, to produce a complete picture of the situation and developments in the 6 countries considered (Armenia; Azerbaijan; Belarus; Georgia; Moldova; Ukraine).

Specific aspects are considered, including the practices adopted in the prosecution of journalists, the fulfilment of legislation on access to information; media ownership; public broadcasting; Internet and New Media regulation.

Armenia: A decrease in the number of cases of defamation filed against journalists and the media, as well as reasonable settlements in the cases that did occur, can be considered a positive trend. However, in 2014 some cases of obstruction of journalists’ professional activities (including by law enforcement bodies) occurred during public protests. The perpetrators were left unpunished. Abusive behaviour by government representative were also recorded. Finally, the escalating geopolitical tensions in the world in 2014, and the resulting unprecedented propaganda war, pose a serious threat to the quality of journalism.

Azerbaijan:This study has revealed a gradual deterioration of media legislation in Azerbaijan in the years 2010-2014, owing mainly to the growing number of legislative provisions unduly restricting freedom of expression and journalistic activities and to the arrest and prosecution of journalists criticizing the government.

Belarus:the country has the most repressive media landscapes of all Eastern Partnership countries together with Azerbaijan. Every year, 50 to 60 journalists are imprisoned on no grounds. Thanks to the work done by the Belarus Association of Journalists, in 2014 the number of imprisoned journalists dropped to 29. At the same time, the legal environment in which the media, distributors of print periodicals, book publishers, and online journalists operate has worsened owing to restrictive amendments to the Mass Media Act, targeting in particular online media.

Georgia: In 2014 there was little to note in terms of either dramatic progress or decrease of freedom of speech in Georgia. The issue of the management and administration of the Georgian Public Broadcaster remains problematic. According to experts, the Georgian National Communications Commission is not acting in a transparent manner, is guided by the authorities.

Moldova: political polarization in the country has been reflected by media in 2014. Moldova maintains the second position among the six countries of the Eastern Partnership, surpassed only by Georgia. Reasons. Changes for the better that were expected in the mass media sphere in the electoral year of 2014 did not occur. Expected reduction of monopolies on the broadcasting and commercial advertising markets did not take place. Because of group interests in the media market, politicians did not demonstrate the necessary political will to adopt legal guarantees for establishing media ownership transparency and avoiding concentration in the media market.

Ukraine: no substantial progress was registered in the field of media freedom in 2014. Despite the fall of Yanukovych’s authoritarian regime in February, problems persist. Overt control over media exerted by oligarchs influence particularly television channels. The influence of owners’ interests over their media outlets’ editorial policies was clearly revealed in the campaign leading up to the parliamentary elections. Nothing has changed with regard to the impunity of those guilty of preventing journalistic activity. The media situation in annexed Crimea and in the territories controlled by Donbas separatists supported by Russia causes serious concern.