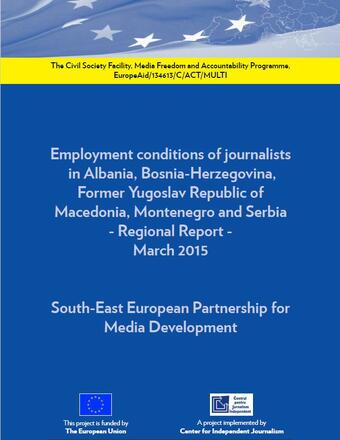 A crowded and rather poor media market, unable to secure the sustainability of media operations, a high level of job insecurity making the journalists vulnerable to political and economic pressures and – more often than not – leading to self-censorship – are some of the conclusions of the Regional report on the Employment Conditions of Journalists in Albania, Bosnia-Herzegovina, Macedonia, Montenegro and Serbia launched by the Center for Independent Journalism in Bucharest, to mark May 3 – World Press Freedom Day.

The report reveals that, all across the region, journalists are making less than the national average salary, which indicates an erosion of the social respect for the profession. Paradoxically, the public media – still unreformed and subject to state influence – offer more stable and better paid jobs. This creates an opportunity for these media, as more and more journalists are seeking these jobs. It also reveals the need for a stronger associative effort on the part of journalists, to protect their rights.

“The labour situation appears to be one of the most sensitive and difficult problems, as the media environment is evolving and the business models are changing as well. While monitoring the systemic changes and the way they affect the basic principles of media freedom and the practice of journalism, we risk to lose focus on the people. This is wrong. There is no journalism without journalists”, said Ioana Avădani, Executive Director of The Center for Independent Journalism (Romania) and project coordinator of the SEE Partnership for Media Development.

The report is authored by the Bulgarian researcher Radomir Cholakov, based on the country reports prepared by national experts from June 2014 and March 2015. It is available here .

The report is part of the program South East European Partnership for Media Development, implemented by a consortium of media organizations from Albania, Bosnia-Herzegovina, Macedonia, Montenegro, Serbia, Bulgaria, and Romania.

The partnership is aimed at bringing new stakeholders to the public debate related to media freedom and independence and at creating synergies between the media organizations and these stakeholders (trade unions, freedom of expression groups, teachers, parents, state actors, etc). The project addresses three main topics: labour conditions for journalists, media education (both for journalists and the public) and freedom of expression at large and is going to be conducted until 2017. The project is co-funded by the "The Civil Society Facility, Media Freedom and Accountability Programme" (EuropeAid/134613/C/ACT/MULTI).