This report published by WAN-IFRA, the Center for International Media Assistance (CIMA), and the Montenegrin Centre for Civic Education (CCE) focuses on the impact of soft-censorship in quickening an already serious decline in media independence in Montenegro 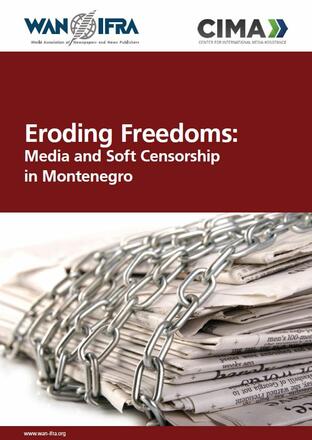 This report describes various means for distributing public funding to media through which political actors exercise control or pressure on media content and viability, by referring to the existing legal framework and semi-structured interviews conducted with prominent editors in the country.

Although forms of “hard censorship” have not disappeared from Montenegro's media landscape, including violence against journalist and impunity for cases dealing with crimes against journalists, soft censorship is a more common phenomenon and exerts a considerable impact on media freedom in the country.

“Soft censorship” is defined as an attempt by government to influence media reporting through various forms of pressures, without recourse to legal bans, open censorship of news content or direct physical attacks against media infrastructure or journalists.Soft censorship is rather based on opaque distribution of public money which favours media aligned with government's position, on the abuse of regulatory and inspection authorities and on para-legal pressures.

The lack of transparent and consistent procedures for distribution of public funds to media has substantial influence on media freedoms in Montenegro. A very serious consequence of this, less obvious than the loss of editorial independence, is the fact that this unfair distribution of public money contributes to polarization of the media scene, undermining the journalists’ code of conduct, and hinders formation of a unified self-regulatory body by Montenegrin media.