Estimating the Economic Benefits of Whistleblower Protection in Public Procurement

The potential economic benefits granted by an effective whistleblower protection system far exceed the costs for its set-up and maintenance, at least as far as contrasting corruption in the EU in concerned 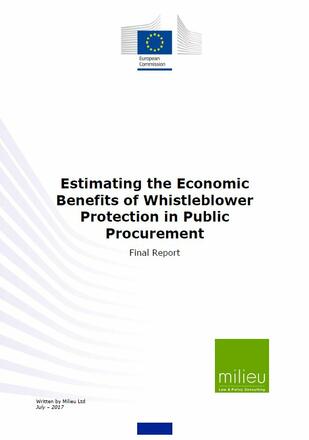 The study was commissioned by the European Commission's DG Growth and it was carried out by the Milieu consultancy firm. It evaluates the set-up of a system for the protection of whistleblowers from an economic point of view, performing a cost-benefit analysis through economic modelling and case studies. The report focuses on the public procurement system in the EU, which represents about 15 percent of its GDP and constitutes a major hotspot for corruption.

The costs implied by the set-up and maintenance of an effective whistleblower protection system are linked to the legislative, administrative and judicial measures that need to be introduced and implemented, as well as to the training and communication activities for the different actors involved. The benefits on which the authors focus are the potential economic benefits of whistleblowers' disclosures, both in terms of identification and recovery of misused public funds.

The report finds that there is a robust economic case for whistleblower protection, as its costs are far lower than its benefits for all of the scenarios considered. The ratio between costs and benefits varies greatly from one country to another, but the former always represent a small fraction of the latter, e.g. the cost-benefit ratio for Ireland is 1:1.4-2.3, for Romania 1:319-532. This means that for every Euro spent in whistleblower protection in Romania, one can expect to recover at least 319 Euros.

While corruption risk in the public procurement sector in the EU is estimated to cost 5.3 billion Euros per year, an effective whistleblower protection system would make it possible to recover from 5.8 to 9.6 billion Euros per year in this field exclusively. On top of that, whistleblowers' disclosures would make it possible to identify a much larger amount of misused public funds.

The relative magnitude of potential benefits with regard to the different national economies depends on their features, on the size of the public procurement sector, and on the level of corruption: it is estimated to be the highest in the Baltic countries and in the states of the Visegrád group.