Europe heats up on risk map for press violations: The Eastern region a serious concern

Women journalists are increasingly attacked around Europe, and appear to be more vulnerable in the Eastern region, as documented by this report. For this reason, CFWIJ calls on European countries to take measures against those interfering with media freedom 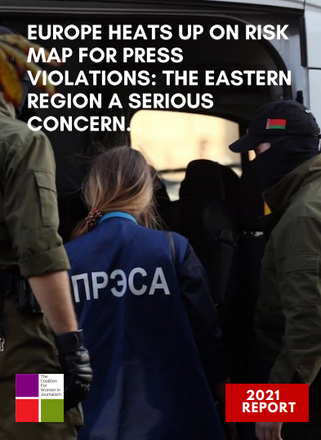 The Coalition For Women In Journalism raises concerns about women journalists’ safety in Eastern Europe, where according to data women have been more vulnerable. The cases documented by CFWIJ include detentions, physical assault, legal harassment, threats of violence, troll campaigns, verbal harassment, arrest, sexual harassment, and state oppression, among others.

Arbitrary detention appears to be a common tactic used to obstruct press freedom, and in the period between January and September, at least 42 women journalists were detained in Europe.