From the very difficult position of local media to the Prime Minister's links to the outlets he used to own, the Czech Republic's issues in the field of freedom of expression are very evident, and the delegation has clear recommendations to give 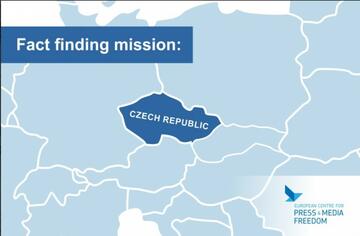 On October 7th and 8th 2019, a fact-finding delegation met “with 14 key informants among journalists, editors, directors, teachers, politicians and founders from various part of the Czech media landscape, both public service media and private media”.

According to the Press Freedom Index of Reporters without Borders, Czech Republic has dropped 27 places in 5 years. One fact: the Prime Minister owned 30% of the private media.

Participants
Mogens Blicher Bjerregård, President of the European Federation of Journalists
Jean Philip De Tender, Director Media at European Broadcasting Union
Jørn Mikkelsen, editor at Jyllands-Posten, Nordic Association of News Publishers
Lucie Sýkorová, Chair of the supervisory board of European Centre for Press and Media Freedom
Adam Černý, President of the Syndicate of Journalists of the Czech Republic
Findings and recommendations
The mission identified six main fields “where changes and improvements would have a positive impact on press freedom and independent media”, such as: