Far-Right Nationalism and Populism in Europe: Assaults on Press Freedom

The study by the Media Governance and Industries Research Lab (University of Vienna) examines how far-right and populist political parties affect independent journalism in democracies and the specific threats they pose to it in 12 European countries: Austria; Bosnia & Herzegovina; Bulgaria; Croatia; France; Germany; Hungary; Italy; Montenegro; Poland; Romania; and Serbia. 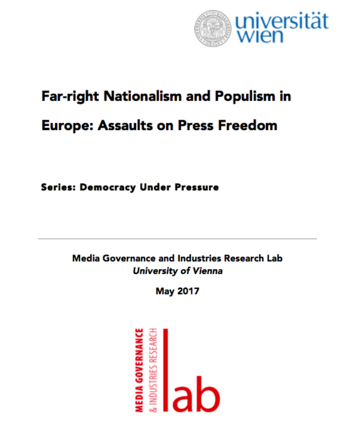 The report takes into account the period between 2012-2016. However the year 2016 is considered to be crucial because it saw a rise in support for far-right and populist parties in a number of European countries.

The seven researchers that carried out the study have adopted a broadened interpretation of the term “assault on media”, considering not only physical attack reports to journalists, but also legal action, threats, intimidation, verbal and online abuse, leverage of employment precarity, abuse of monopolistic media positions by state and private actors.

Some of the countries included in the study are placed in high positions in terms of press freedom in The World Press Freedom Index. However the study shows that countries characterized by the presence of strong far-right and populist political movements have similar patterns of threats posed to journalists, even when they are highly ranked for press freedom.

In Bulgaria far-right populism is a relatively new phenomenon and it has contributed to the declining safety of journalists. However, the Bulgarian nationalist-populist party Ataka -  led by a journalist - produces most of its media content itself through its own television channel and a daily newspaper. As a consequence, members of other major media tend to limit themselves to reporting only high-profile incidents. In addition, right-wing populism in Bulgaria is among the concerns for journalism safety in the state, but it is overshadowed by issues of media ownership, organised crime, and overall political involvement. Similarly to Bulgaria, the political party version of right-wing populism in Romania is both left and right, whilst actual glorified interwar fascism and nationalism belong to the realm of youth movements and societies. While right-wing populism is hardly ever reported as the direct perpetrator of acts against journalists and media workers, it is often politicians or opposition journalists that engage in harassment against colleagues.

In Croatia attacks against journalists working for “unconventional media” come both from minor right wing parties and the ruling HDZ party and also from some media and journalists acting as political agitators and manipulators. Bosnia and Herzegovina is said to suffer - with other Western Balkan Countries - from a “transplant effect”. The term refers to the adoption of important laws regulating the media sphere which are borrowed  from another context and not fully fitting to local context. The report points out that B&H's main problem remains division based on nationalism, intolerance and economic decline as consequences of the 1992-95 war and the following peace agreement. As a result each entity has its own public broadcaster and in general media are divided along ethnic lines. The same division also applies to public service broadcasting service (one country-wide service, and two separate-entity public broadcasters)  which are “designed to promote cohesion and tolerance” but “tend to behave as rivals”. The study adds that these channels have been used and abused by different political parties, generally organised along ethnic lines, while the country-wide public broadcaster has been especially targeted by political parties.

Serbia is defined as “an authoritarian system based on democratic institutions and procedures, built under the definitions of EU accession”, where practice does not seem to follow “the written rules of the game”. The report affirms that although Prime Minister Aleksandar Vučić has transformed his political image of an ultranationalist to a moderate, pro EU populist, financial and editorial pressure is heavily applied to media. This results in the removal of any serious criticism and in a strict self-censorship, while several attacks to journalists - both verbal and physical - are also reported.  Besides the policies of the government, empowerment of conservative ideologies, such as extremism, nationalism, and intolerance are considered to be among the causes of these problems. On the other hand, in Montenegro, where populism does not seem to pose a major threat for journalists at the moment, there is a potential for its growth for its historical connection with Serbia and the still present Serbian influence on its society, politics and everyday life.

In Austria, the far-right Freedom Party (FPÖ) is reported to have gained significant strength after 2013 general elections, while the leader of the party regularly accuses the media of lying. The website unsenzuriert.at, a portal linked to FPÖ, echoes these accusations, propagating 'alternative’ truths which are widely shared across social media. Social media platforms also seem to be the place where journalists are targeted, with women being targeted more than men, especially when they write about feminism or refugees.

In Germany, where in recent years there have been a rise of right wing populism in the form of so-called PEGIDA and LEGIDA movements, attacks against journalists have sharply increased in 2015 in conjunction with the so-called refugee crisis. Reporters covering  radical right-wing groups are often seen as “enemies” and subject to harassment, threats and physical violence, especially in former Eastern Germany regions (Saxony, Saxony-Anhalt and Thuringia). Italy displays no right-wing-populist anti-Islamic movements like the German Pegida, although there exist a number of populist groups, two of which are in the Italian parliament (Lega Nord and Movimento 5 Stelle). According to the report the threats posed to journalists could be classified in three main categories: legal abuse; obstacles to the right of information and physical attacks. On the other hand, the problems that journalists in France have when they cover the Front National depends on the degree to which they are perceived by the party to be critical or unbiased. The hostility towards reporters vary from not allowing them into meetings or not inviting to press conferences to highly aggressive acts committed by activists and tolerated by the party.

In Hungary, where there are traced similarities with Front National’s approach to press, far-right Jobbik party displays different attitudes towards journalists. The high rank politicians of Jobbik have been trying to establish a good relationship with the media as long as they remained within certain lines. On the other hand the basis of the party is very hostile to what they call  “Judeo-liberal press”. However, the security service appears to be careful to avoid safety problems to journalists. Other forms of harassment include publishing the phone numbers of those journalists whom the party's supporters label as enemies of the Hungarian nation. Intellectuals and journalists from the populist - if not far-right - party Fidesz use a rhetoric towards opposition or liberal journalists as if they were a right-wing nationalistic militant party, threatening to use physical harassment. As for the case of Poland the study affirms that the current Polish government, led by the right-wing nationalist party Prawo i Sprawiedliwość, is behaving “very unfriendly towards journalists”. A lack of press and communication politics is reported, while politicians tend to keep journalists - even those supporting the government - out of the public affairs and do not inform them. On the other hand, there are next to no physical attacks against journalists in Poland. However journalists are often confronted by criminal defamation proceedings, started not just by populist politicians.

Key findings common to all the countries taken into account include: