Feindbild Journalist by ECPMF reports on the physical attacks journalists faced in Germany in 2018. It also compares the results with the analyses carried out in the previous years 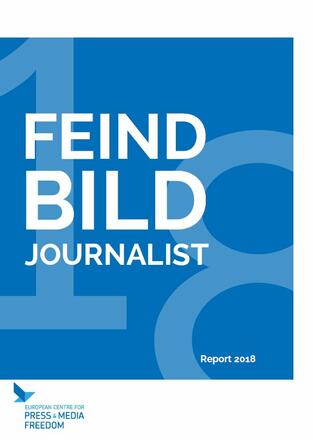 The European Centre for Press and Media Freedom (ECPMF) documents in this report the attacks journalists experienced during 2018 in Germany and compares the current situation to the previous four years (since 2015) that the ECPMF has researched on.

In 2018, 26 attacks against journalists took place, with a worrying increase compared to 2017. Attackers mostly had a far-right background and most attacks took place during political gatherings and protests, as a result of viewing journalism as 'lying press'. The majority of these attacks took place against journalists who were recording the scenes or were holding cameras. 2018 started with the attack to journalist Ney Sommerfeld at a far-right demonstration in Cottbus, and the trend went on, mostly in Thuringia and Saxony. Violence peaked in August, when reporters and journalists were beaten with objects and weapons in Chemnitz. The last quarter of the year witnessed fewer incidents.

The years 2016 and 2017 experienced fewer cases of attacks to journalists also due to the smaller number of big demonstrations carried out by extremist groups, whereas this number remarkably increased in 2018, together with the number of people involved. The main place of gathering was indicated in Chemnitz, home to the far-right movement 'Pro Chemnitz'.
The report also inquiries into the frequency of these events according to the German Lands, highlighting that in 2018 journalists working in Saxony were the main targets. According to the report, this distribution can be explained by the events that occured in Chemnitz in 2018, where 11 incidents occurred. The comparison over four years further confirms the unique position of Saxony: almost half of the verified assaults across the whole of Germany, 47 out of 96, were committed in Saxony.

This situation has led the press to accuse the Saxon government of not taking action against right-wing extremism, in a region where trust in democracy and press is lower than in the rest of Germany. This tendency in East Germany increased after the emergence of Pegida in 2014, a German nationalist and far-right movement founded in Dresden. Since then, as the report suggests, journalists attending far-right demonstrations are indiscriminately threatened with potential violence. Since May 2017, Pegida established a solidal relationship with the right-wing party AfD; this liaison aims to involve more people, particularly the 'endangered citizens' who present themselves as average citizens, thus it is harder for journalists to estimate the level of risk during protests and demonstrations.

As the report shows, this situation has also caused journalists to be highly critical towards police forces which would fail to protect them during such demonstrations. On the other hand, it is underlined that the situation is complicated by the acute level of threat, police officers’ inadequate knowledge of journalists’ rights, and the fact that security forces are short-staffed.
Due to this dangerous situation, some media outlets will send journalists to cover demonstrations only accompanied by bodyguards. Since a declaration was released in September 2018 by the Interior Minister of the Federal States, who asked for an intensive dialogue between the press and the police, some improvements could be observed, like appointing additional contacts for the press at political rallies. Different editors-in-chief, such as Sven Gösmann of the dpa press agency, stressed the importance of free press and the need for reliable journalism, able to report the truth.

Finally, the report draws conclusions for 2018 and suggests an outlook for 2019: 2018 showed that a single event, like the one in Chemnitz, is able to cause a breakout in violence against journalists. This violence is not only perpetrated by strategic attacks by far-right representatives, but also by demonstrators who decided to attack spontaneously. This worsening of the right-wing scene has brought journalists to demand private protection or to avoiding attending and reporting on such demonstrations.
With the upcoming state parliamentary elections, political restructuring is likely in three Lands of East Germany, namely Brandenburg, Saxony, and Thuringia. The report stresses that it is urgent for security forces to keep potentially violent actors distant from peaceful participants, so that journalists are effectively protected.