Fighting Words: Journalism Under Assault in Central and Eastern Europe

The report examines the state of press freedom in Central and Eastern Europe. Based on the results of a survey of almost a hundred journalists, the paper suggests possible measures to support independent journalism 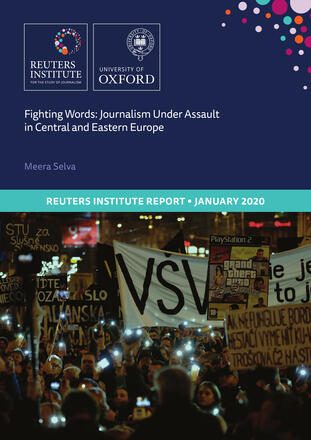 The autonomy of the media in Central and Eastern Europe is under threat from both politicians, who discredit individual journalists and media outlets and launch lawsuits, and other journalists who work for pro-government or rival outlets.

The report focuses on the direct experience of journalists working in 16 countries, as it contains the results of an online survey and on-and-off-the-record interviews about the threats that they identify.

The issues found in the questions listed in the survey include:

- forms of direct criticism by politicians (for instance in a speech, or via social media);

- ways in which journalists have been harassed;

- ways in which journalists have had their privacy compromised (phone calls recorded, death threats, emails intercepted, being doxxed, being asked by authorities to identify sources).

According to the study, "there is also in many countries an outright state of media capture, where media outlets have been brought under direct or indirect government control". In addition, the media landscape is characterised by increasing polarisation.

The first conclusion of the report is that it is necessary to ask journalists what they need. This is why the survey included a question about the most useful sources of support for journalists under attack. The majority answered that it would be important to receive support from other media organisations in the country, followed by being helped with legal costs and being supported by international organisations.

The report highlights that it is vital to end the polarisation of journalists, as most attacks come from other journalists within the same country.

There is also a recommendation to rethink the relationship between media organisations and the public. In order to achieve this, journalists need to present themselves directly to the public, talking about their job and the reasons why they do it, instead of just showing the stories they cover. In doing so, they would be able to raise awareness and gain public support.