Publication Date: July 2018
Research and Editorial Team: Department of the Taoiseach
Link: First Report of the Interdepartmental Group on the Security of Ireland's Electoral Process and Disinformation 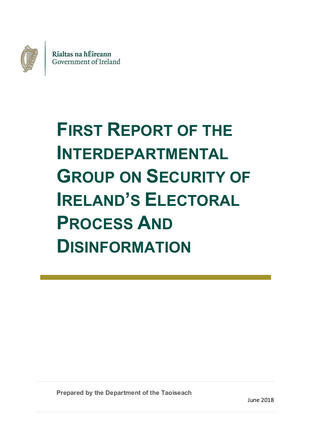 Concentration of Media Ownership in Ireland

The report was produced by an interdepartmental group established by the Irish Government to consider the security of the elections in relation with disinformation. The group was coordinated by the Department of the Taoiseach, the prime minister.

After an overview of the common concerns and actions at an international and EU levels, the report makes a risk assessment. Social media is the second main source for news (53%, while the first one is TV with 56%), even if people have low trust in them (28%), and only 28% understand the role of algorithmic targeting and spread of disinformation, which is also a concern for 57%. A survey during the referendum on the 8th Amendment of the Constitution (regarding abortion) on a sample of political advertising found 317 different groups paying for ads, with 21 of these untraceable. Ads from those last groups were used to “mislead voters, discredit political figures and groups, mimic official or neutral information sources, gather voter data and share disturbing images.”

The report states that a key mitigation factor for disinformation is media literacy and Ireland performs well. Fact-checking is another instrument to fight disinformation. In Ireland Facebook has partnered with TheJournal.ie to identify disinformation in advance of the May 2018 Referendum. Irish people have generally more trust in news (71% trust in “most news”, 78% trust in news specifically chosen) that the EU average (62% for “most news”). According to the report journalism in Ireland has a tradition of high standards, and a “high degree of political neutrality relative to other countries”. This culture contributes to well-informed public debate.

Legal protections for the right to privacy and the right to a good name, including defamation law, inhibit disinformation that includes grossly defamatory attacks. However these provisions are criticised by journalists because of the restrictions on reporting they provoke.

While there is a Referendum Commission, an independent body which provides factual and impartial information to the public about referendums, there is no Electoral Commission with a complete oversight role: this is a matter of concern and it is recommended that one should be established. The report finds low risk related to the register of electors and the polling and counting of votes, and a medium risk related to funding, as there is no spending limits and no restriction on foreign-based persons or organisations. Low risk is found related to traditional print and broadcasting, while it is reported a high risk related to online platforms. This is due to two main reasons: they lack transparency of advertising because they are not subject to direct regulation and susceptible to micro-targeting. A medium risk related to cyber security is also found in the report.

The study makes several proposals, including: