Free to Think 2021. Report of the Scholars at Risk Academic Freedom Monitoring Project

The seventh installment of an annual report by Scholars at Risk’s Academic Freedom Monitoring Project. The report analyzes 332 attacks on higher education communities in 65 countries and territories around the world between September 1, 2020 and August 31, 2021 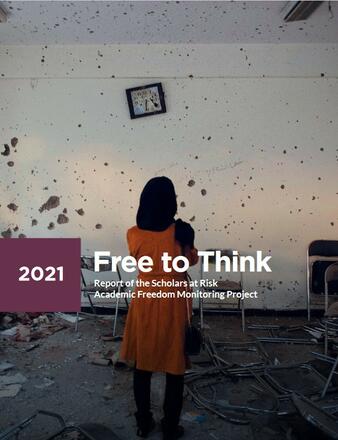 “We are Amaya”. Advocacy for Academic Freedom

Free to Think 2021 documents 332 attacks on higher education communities in 65 countries and territories. This year was marked by the ongoing COVID-19 pandemic, which has claimed more than five million lives.

State authorities detained, prosecuted, and used other coercive legal measures to punish and restrict scholars’ and students’ research, teaching, and extramural expression and associations, often under laws or on grounds ostensibly related to national security, terrorism, sedition, and defamation.

Higher education officials suspended, fired, and took other disciplinary actions against faculty and students for their academic work and extramural expressive activities, including expression critical of their institutions and participation in protests and social movements.

Scholars at Risk calls on states, higher education communities, and civil society around the world to respond to these attacks.