Freedom House yearly report on press freedom in Albania provides a synthetic overview of media freedom in the country during 2014, highlighting main trends and developments 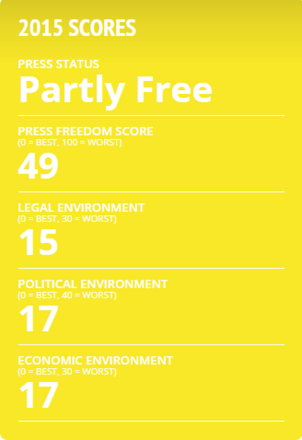 The report considers three main dimensions affecting freedom of the press in Albania during 2014, namely the legal, political and economic environments.

With respect to legal aspects defamation remains a criminal offence, but prison terms as a punishment has been eliminated in 2012.

The country’s broadcast media regulator, the Audiovisual Media Authority (AMA), continues to be regarded as highly politicized. The public broadcaster, RTSH, is financially dependent on the state and typically shows a strong pro-government bias. Transparency in private media ownership remains limited with negative impact on the independece of private media. State influence is exerted also on private media through advertising revenues.

Cases have been registered of physical obstruction to prevent journalists to report some events. In June 2014, criminal suspects shot at a television crew in a village know for drug trafficking.