Freedom House yearly report on press freedom in Armenia provides a synthetic overview of media freedom in the country during 2014, highlighting main trends and developments 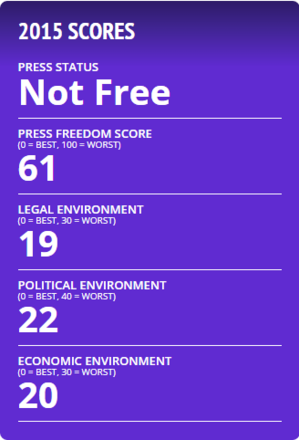 Armenia records in terms of media freedom remained negative also in 2014, mostly due to widespread forms of harassment against journalists.

Defamation was decriminalized in 2010, but the offence remains subject to high monetary penalties. Moreover, self-censorship, harassments and violence against journalists and their impunity are common and originate from different sources. In May 2014, the general prosecutor circulated a warning according to which journalists who report about ongoing investigations without authorization could face criminal proceedings. Along with this, the local NGO Committee to Protect Freedom of Expression (CPFE) reported 9 physical attacks against journalists. Particularly, Ani Gevorkyan, journalist of the newspaper Chorrord Ishkhanutyun, was assaulted by a police officer during opposition demonstrations in February.

Access to information is guaranteed by law, but the access to some files—including previously classified Soviet-era data—remains limited.

Most of the broadcast media are controlled by the government or companies close to it. Media on line are playing an important role providing alternative news and points of view.