Freedom House yearly report on press freedom in Azerbaijan provides a synthetic overview of media freedom in the country during 2014, highlighting main trends and developments 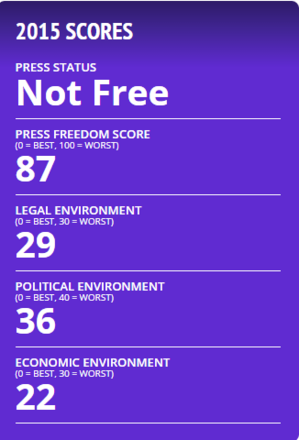 Negative trends in Azerbaijan media freedom situation have intensified in 2014 due to governmental repression of dissent and criticism. Legal measures are used to silence media and journalists when expressing dissent.

Freedom of speech and access to information are severely restricted. Defamation is still a criminal offence as well as the dissemination of information that damages the honour and dignity of the President.

The National Television and Radio Council (NTRC) is composed of 9 members, all of them nominated by the government. NTRC has been criticized for lack of transparency and for having banned all foreign broadcasters. The Institute for Reporters’ Freedom and Safety (IRFS), the Media Rights Institute and other international organizations were forced to leave the country in 2014.

Surveillance is strong also on social media activists and bloggers, with recurring banning of their websites. At the end of 2014, 8 journalists were in jail, and several bloggers were imprisoned on fake drug charges. Three human rights defenders were arrested in 2014. In August 2014, the independent journalist Ilgar Nasibov was found death in his office while the murder of Elmar Huseynov of Monitor magazine and of Rafig Tagi are still unsolved.

The print and the media sectors are almost entirely in the hands of Aliyev, directly or through economic pressure.