Freedom House yearly report on press freedom in Bosnia Herzegovina provides a synthetic overview of media freedom in the country during 2014, highlighting main trends and developments 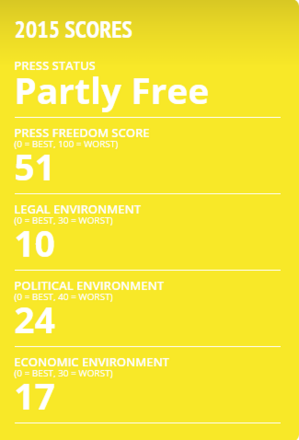 Notable pressure is exerted on journalists by political and economic forces. Although both entities prohibit hate speech, inflammatory rhetoric is frequent in media.

Pressure is exerted on media and journalists by politicians and business leaders, resulting in limited independence and self-censorship.

Political and institutional division in the country is mirrored in the structure of the public broadcasters. There are three public broadcaster in Bosnia: RTBiH for the Federation, RTRS for the Republika Srpska while BHRT covers both entities.