Freedom House yearly report on press freedom in Croatia provides a synthetic overview of media freedom in the country during 2014, highlighting main trends and developments. 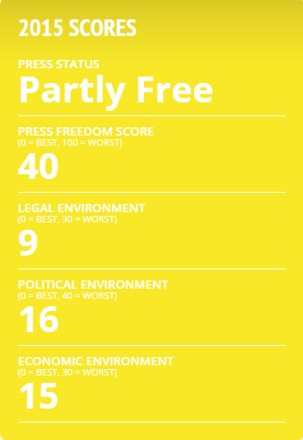 The constitution of Croatia recognizes freedom of the press and the right to informatiaon. Yet, there are some legislative restriction in the country: defamation and “shaming” are punished as criminal acts. In 2014, Slavica Lukić became the first journalists to be convicted for “shaming” due to a reporting about the medical company Medikol. Media and watchdogs organizations requested to the parliament to amend the law in question, but at the end of the year no legislative changes were made.

During 2014, critiques have been raised against the Agency for Electronic Media, for lack of transparency in the licensing of broadcast outlets. The Croatia Radio-Television (HRT), the public broadcaster, is seen as representing political interests, lacking transparency and failing to respect professional standards.

Violence against journalists is decreasing compared to the past, but death threats, harassments and the risk to loose advertisement revenues continues to hinder the capacity of journalists to carry out investigative reporting.

The economic situation is characterized by a significant concentration of media ownership and the existence of a large corporation controlling a large percentage of advertisement as well as newspapers' distribution. With the economic crises, the salaries of journalists have suffered a substantial decrease.