Freedom House yearly report on press freedom in Georgia provides a synthetic overview of media freedom in the country during 2014, highlighting main trends and developments 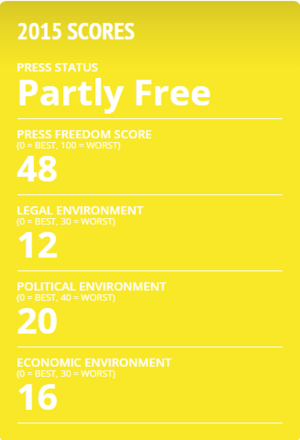 Georgia constitution and legal frame is one of the most progressive in the Caucasus region. In the effort to bring its legislation in line with European standards, defamation has been decriminalized and guarantees have been adopted in the field of cable operators. In the same line, the law on access to information has been adopted although implementation remains partial.

The strong political polarization in the country affects media freedom and gives rise to deliberate attacks by politicians against journalists and media outlets accused of “biased coverage”.

Strong ties remain between media outlets and political parties or interests. The Georgian National Communications Commission (GNCC) is accused of lacking independence resulting in the fact that licenses are sometimes awarded on the basis of outlet’s political affiliations.

Intimidations and harassment still constitute a serious problem limiting the work of journalists. Zaza Davitaia, a journalist of “Asaval-Dasavali’’ newspaper was assaulted twice in October 2014 and Erosi Kitsmarishvili, one of the founder of the TV channel Rustavi2, was found dead.

Ownership concentration remains an issue in the country's media landscape, as well as the role of political interests in the distribution of advertisement revenues.