Freedom House yearly report on press freedom in Greece provides a synthetic overview of media freedom in the country during 2014, highlighting main trends and developments 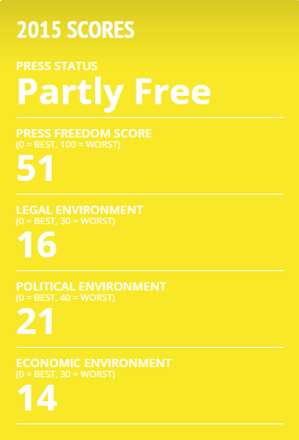 Concerning the legal environment, defamation remains a criminal offence in Greece. Legal proceedings have been launched against journalists, among which in 2014 journalist Popi Christodoulidou was investigated under several articles of the military penal code for publishing “sensitive information”.

The independence of the newly established public broadcaster has been strongly questioned during the year due to interference by politics especially regarding coverage of the government’s controversial austerity policies.

During the year, several attacks against journalists and their offices were reportedby extremist groups, and seldom followed by effective investigations.

The economic crisis affecting the country led to many broadcasters and journals being shut, contributing to a general trend of media ownership concentration.