Freedom House yearly report on press freedom in Kosovo provides a synthetic overview of media freedom in the country during 2014, highlighting main trends and developments 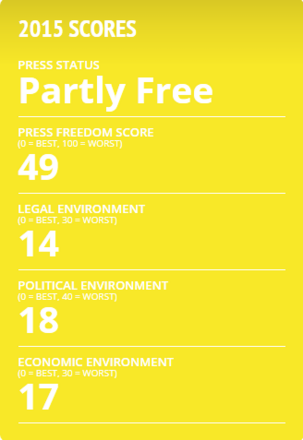 Kosovo's legal framework protects freedom of the press, and media laws are in line with the EU standards. Notwithstanding this, the media environment is affected by political interference, financial pressure, and significant ownership concentration.Political interference is widespread, affecting also the Independent Media Commission (IMC) in charge of licensing broadcasts.

Along with this, lack of experience and training of the judiciary and the police officers when confronting threats against media. The right to access to information has been established by law in 2010 but remains poorly respected. The Association of Journalists of Kosovo (AGK) reported frequent threats against journalists. The newspaper Koha Ditore was threatened to be prosecuted after refusing to hand over documents about EULEX alleged corruption.