Freedom House yearly report on press freedom in Macedonia provides a synthetic overview of media freedom in the country during 2014, highlighting main trends and developments 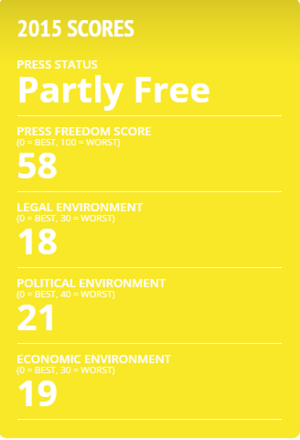 Serious deficiencies have been recorded in the commitment of Macedonian authorities in upholding legal commitments. Already in 2013 the case of Tomislav Kezarovski had drawn international attention on the attempts to use of criminal laws to restrict journalistic activity.

Although defamation has been decriminalized in 2012, but the offence remains subject to high monetary penalties.

Media regulation is affected by a strong political and economic influence in the licensing process.

The influence of the government of media is so far reaching, that in 2014 attempts at controlling journalists associations, resulting in the incitement to polarization between journalists' organization in the country, have been recorded.

Harassments, physical violence and threats against journalists are frequent and often remain unpunished.