Freedom House's yearly report on press freedom in Poland provides an overview of media freedom in the country during 2016, highlighting main trends and developments 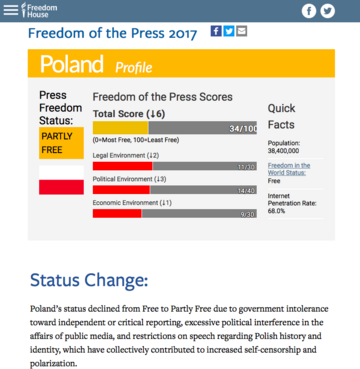 During 2016, Poland’s status declined from “Free” to “Partly Free” due to government intolerance toward critical reporting, excessive political interference in the affairs of public media and restrictions on freedom of speech, in particular on issues regarding Polish history and identity.

As in previous years, Poland continues to have a highly polarized media environment. Upon taking office in late 2015, the conservative PiS (Law and Justice) government began an overhaul of the country’s public television and radio broadcasters, citing a need to “depoliticize” the airwaves. As a consequence, by April 2016 more than 140 employees at public outlets had resigned or been fired.

According to the report the ruling party has been also championing a particular historical narrative – which has become evident in the public media and other government-backed programs – while the antiterrorism legislation adopted in June 2016 gave the government the right to block websites. On the other side, Polish print media and radio outlets are predominantly private and highly diversified in terms of ownership.

In Poland physical attacks against journalists continues to be rare.