Freedom House yearly report on press freedom in Romania provides a synthetic overview of media freedom in the country during 2014, highlighting main trends and developments 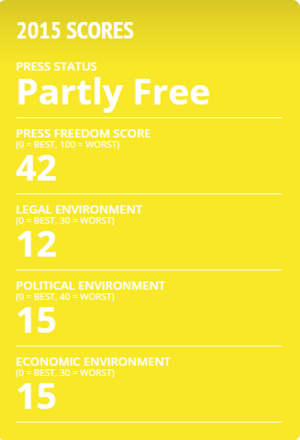 Media coverage of the electoral campaign for the presidential election in 2014 was highly influenced by the political agenda of media owners.

Independence of the public broadcast is limited mostly due to the fact that its leadership is changed on occasion of every parliamentary election, as a means for the winning party to control public media.

The private media sector is affected by lack of transparency and consequent abuse of private media to promote owners' personal agenda.

The working conditions of journalists are extremely low, due to low wages and insecurity. Attacks against journalists remain frequent in Romania, be in the form of verbal abuse, intimidations or physical attacks by protesters and by police officers. The reporter Stefan Mako was beaten by the police while he was recording them arresting an other man.