Freedom House yearly report on press freedom in Serbia provides a synthetic overview of media freedom in the country during 2014, highlighting main trends and developments 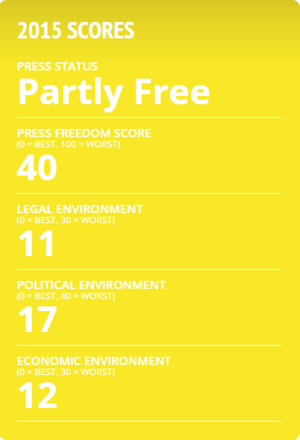 In 2014, journalists in Serbia underwent remarkable pressures both from the economic and the political spheres. Serbian Prime Minister Alexandar Vučić has put pressure against journalists and media which had criticized him and his govern in several occasions. For instance, when the Balkan Investigative Reporting Network (BIRN) published in August 2014 a report suggesting that the Serbian government had overpaid for its share in the Air Serbia airline, Vučić dismissed BIRN’s investigation by defining them “spies”.

From 2012 defamation is consider civil offence, but a journalist can be jailed if not able to pay the fine. The reform of 2014 about media aimed to harmonize the Serbian laws with the EU standards, but effective implementation lags behind.

Self-censorship is widespread as a result of both political and economic pressure. Most of media depends on government subsides and advertisement revenues, and the economic crisis contributed to increase self-censorship lowering the quality of journalism. Following the floods in May 2014, the government declared a state of emergency limiting, among the other things, the liberty of journalists to report from the area hit by the disaster. According to reports, police detained 3 journalists for questioning during this period, and 20 more were invited for questioning.