Freedom House yearly report on press freedom in Slovenia provides a synthetic overview of media freedom in the country during 2014, highlighting main trends and developments 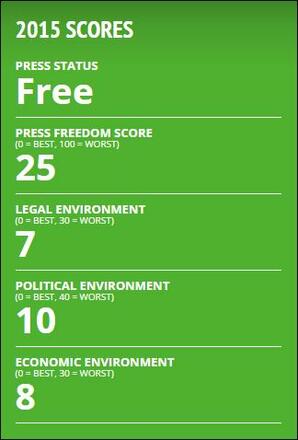 The legal system of Slovenia guarantee the freedom of speech and of the press. Defamation is still a criminal offence and the "right of correction" has been established by law in 2006. Moreover, the law foresees the possibility to force journalists to reveal their sources, as occurred in the infamous case of the journalist Anuška Delić, accused for publishingclassified informations. Since 2003, the Access to Public Information Act establishes the right to access information of public relevance.

Regarding censorship, journalists in Slovenia, particularly those employed by the public broadcaster, reported political pressure in specific circumstance. There are guaranteed programs for Italian and Hungarian ethic minorities. In 2014, no episodes of violence against journalist was reported.

From the economic point of view, the small media market of Slovenia increases the possibility for different forms of pressures and creates challenging working conditions, especially for media critical towards the government.