Freedom House yearly report on press freedom in Turkey provides a synthetic overview of media freedom in the country during 2014, highlighting main trends and developments 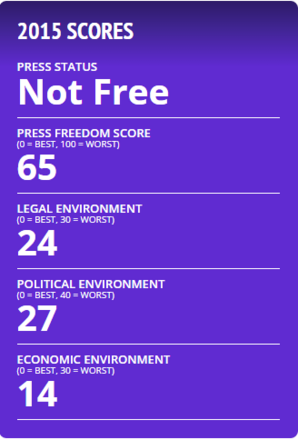 Freedom of the press in Turkey is only partially respected, the report notes. Since 2013 Turkey is categorized by Freedom House as a country where the press is “Not free”. During and after the Gezi Park protests, journalists have faced harassment and death threats as a consequence of their coverage of the protests.

The government has implemented significant reforms of the penal code, the criminal procedure code and the antiterrorism law against journalists. The laws approved in 2014 permits to block websites and to access any personal data without a court order. Defamation is still a criminal offence and the "denigration of the Turkey nation" is a crime. The government is prosecuting journalists reporting on corruption, while the access to official informations remains limited. Some journalists have been denied the access to events, police facilities, conference and visits abroad.