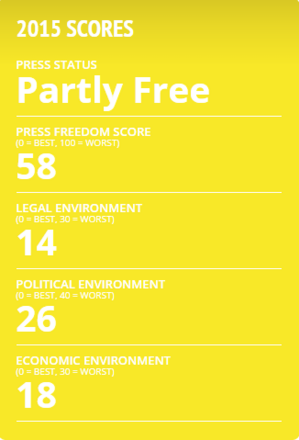 Ukraine’s status improved from Not Free to Partly Free due to profound changes in the media environment after the fall of President Viktor Yanukovych’s government in February. Defamation was decriminalized in 2001, but reintroduced during Euromaidan protest. After Yanukovych fled the country the parliament adopted legislation to access to public informations and declared new election for the National Television and Radio Broadcasting Council of Ukraine.

With the new government, state and political pressure on the media have slightly decreased. Yet, significant issues still affect media freedom in the country, particularly referring to the propaganda war with Russia. In 2014 the government adopted the decision to censor 15 Russian channels which were supporting the Kremlin’s occupation of Crimea, and banned journalists of Russian-language newspaper Vesti.

In the same wake of propaganda confrontation, in Donetsk and Luhansk transmissions of Ukrainian channels were replaced with pro-Kremlin channels from Russia.

Five journalists and two media workers were killed in Ukraine during 2014. Most of the 286 physical assaults on journalists registered in 2014 were documented during Euromaidan protests.