The latest report by Freedom House portrays a grim outlook for media freedom and media workers across continents and political systems, with the US leading by (negative) example and the EU failing to enforce democratic standards, including with prospective Member States 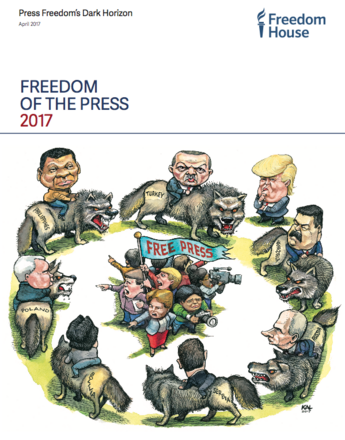 “Global press freedom declined to its lowest point in 13 years in 2016 amid unprecedented threats to journalists and media outlets in major democracies and new moves by authoritarian states to control the media, including beyond their borders”. Thus reads the beginning of Freedom House's Freedom of the Press report 2017.

Based on the examination of 66 countries and territories across the world, the report finds media freedom declining across continents and political systems, highlighting how disparaging of the media by the Trump administration has led to emulation in some cases and a general lessening of standards, "opening the door to broader harassment". For instance, in the Netherlands, "anti-immigration politician Geert Wilders openly emulated Donald Trump’s strategy of bypassing mainstream media and disseminating his inflammatory views to the public via Twitter".

The EU, on the other hand, also struggles to uphold democratic standards. As the report points out, "the EU’s silence in the face of violations in prospective member states in the Balkans is an important example of its diminished influence". Several concerning cases are cited of limitations, pressure, and outright harassment of media outlets and media workers in Montenegro, Macedonia, Serbia, and Kosovo, with local political elites "apparently emboldened by the EU’s flagging commitment to enforcing democratic standards".

Azerbaijan and Uzbekistan are among the world’s 10 worst-rated countries and territories, while Turkey and Serbia are among the countries that suffered the largest declines. In Turkey, the coup attempt against President Erdoğan in July served as pretext for dozens of outlets shuttered, thousands of journalists and media workers losing their jobs, and social media and blogs being blocked or taken down.

In this regard, a resolution by the UN Human Rights Council, condemning telecommunications blackouts as a violation of international human rights law, has not discouraged the "growing normalization" of such a practice, with repressive governments using blackouts of social media and internet service to curtail the flow of information and silence dissent, especially during protests or elections.

According to the report, only 13% percent of the world’s population enjoys a free press, i.e. "a media environment where coverage of political news is robust, the safety of journalists is guaranteed, state intrusion in media affairs is minimal, and the press is not subject to onerous legal or economic pressures".