Freedom and the Media: a Downward Spiral

The Freedom in the World report shows that free press is declining around the world and that this threatens the status of democracy. Freedom of the Media is under attack not only in historically Not Free countries, but also in some of the most influential Free democracies in the world 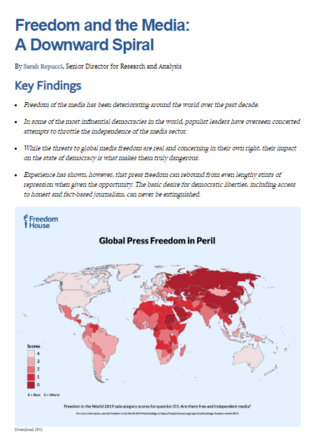 Freedom House's 2019 report on media freedom states that freedom of the media has been deteriorating around the world over the past decade. The study highlights the following key findings:

The trend of declining free press is linked to the decline of democracy itself as it is both a symptom of and a contributor to the breakdown of other democratic institutions and principles. The deterioration has been happening both in authoritarian states and in open democracies, with Europe and Eurasia and the Middle East being the worst cases.

ATTACKS ON PRESS FREEDOM IN DEMOCRACIES

In some established democracies, governments threaten the freedom of the media through practices like corruption and intimidation. These practices are linked to the rise of right-wing populism and the overall reduction in political rights and civil liberties, which caused a reduction in the press freedom scores of 16 countries designated as free by the report over the past five years. Israel's prime minister Benjamin Netanyahu faces corruption charges because he showed willingness to sacrifice press freedom in order to maintain political power, but he still won the elections. In India the media sector is being “instructed” on how to cover government activities: the press should avoid “anti-national” speech and those journalists who push back are intimidated by government-aligned thugs. Donald Trump's repeated vilification of the press has exacerbated an ongoing erosion of public trust in the mainstream media and had a tangible impact on the global landscape: journalists are not confident that the US will help them if their rights are violated.

Over the past five years, in overall terms, 28% of countries already labelled as Not Free in the report experienced a decline in press freedom, Partly Free countries were equally likely to experience a gain as a decline, and 19% of Free countries suffered a drop in media freedom. Violence (including murders) and harassment played a role in 63% of the countries with a negative trend. The two least free regions of the world, Eurasia and MENA, saw their scores decline by 9 and 11 percent respectively, while in Europe press freedom dropped by 8 percent.

GUIDING LIGHTS IN THE DARKNESS

Ethiopia, Malaysia, Armenia, Ecuador, and The Gambia all experienced democratic progress and only in Armenia this was not correlated with improvements in press freedom. This showed the resilience of independent journalism, even after years of repression: journalists returned from abroad and outlets rebounded from censorship, and more locals entered the profession. Media freedom recovers more quickly than other elements of democracy, but it is also subject to rapid reversals (such as in the case of the Arab Spring). It is not an end state and it must be nurtured and defended.

THE MEDIA AND DEMOCRACY

Media freedom is crucial to keep the population informed and leaders accountable, hence its state affects the overall condition of democracy. In Algeria journalists played a key role in the April 2019 ouster of authoritarian president Abdelaziz Bouteflika. The protests that led to the arrest of Sudanese president Omar al-Bashir were also fuelled by unbiased news coming from citizen journalists and exile-based outlets. The pressure exercised by the regime of Maduro in Venezuela led journalists to develop alternative ways to disseminate news, such as through social media, the Internet, international partners and technology to record video with low bandwidth and then automatically delete it after transfer to a secure server. Some media outlets have also forged direct relationship with subsets of the population, fostering public trust. In Armenia some outlets were able to provide steady in-depth reporting of mass demonstrations, this helped the revolutionary movement to gain momentum and legitimisation. But the action of a few brave journalists is not enough to guarantee billions of people free access to information.

This essay is the first in a series of four on the links between media freedom and democracy, also including:

The report suggests that the following recommendations for policymakers in democratic nations will help ensure the sustainability of independent media worldwide:

Finally, with reference to some European countries, the report highlights the following aspects: