The report by Freedom House provides an evaluation of the state of democracy in the world in 2017, analysing trends in freedom including freedom of elections, freedom of the press and the rule of law 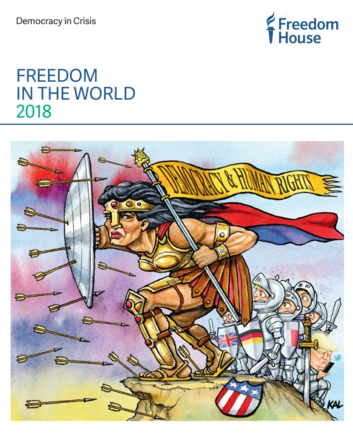 The report evaluates the state of freedom in 195 countries and 14 territories during calendar year 2017, with each unit then evaluated in a scale from 0 to 4 on 25 different indicators. These scores are used to determine two numerical ratings for political rights and civil liberties. The report aims to assess the real world rights and freedoms enjoyed by individuals, rather than governments and government performance per se. Political rights and civil liberties can be affected by both state and non-state actors, including insurgents and armed groups.

The report suggest the list of countries to be watched in 2018, as they are approaching a turning point in their democratic trajectory, and deserve special scrutiny during the year, such as Georgia, Macedonia, Uzbekistan and others.

The report also reveals that the 2015-2016 refugee crisis is still affecting the rise of xenophobic, far-right parties, which gained ground around Europe. Developments in the Balkans showed that the region still requires involvement of Western democracies, report argues.