Freedom in the World 2020 - A Leaderless Struggle for Democracy

2019 was the 14th consecutive year of decline in global freedom. Some highlights from Freedom House's annual report on political rights and civil liberties 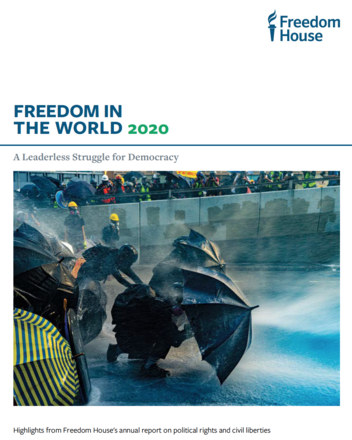 In 2019, 64 countries experienced deterioration in their political rights and civil liberties, while just 37 experienced improvements.

The report describes the alarming decline of freedom particularly in India, China, and the USA, and highlights a global trend that involves freely elected leaders in democratic countries who “distance themselves from traditional elites and political norms, claim to speak for a more authentic popular base, and use the ensuing confrontations to justify extreme policies—against minorities and pluralism in particular”.

In every region of the world, mass protests emerged or persisted during the whole year, with people demanding changes and democratic governance. Nevertheless, most of the time these have failed as they have frequently found a stronger resistance from defenders of the status quo. Further and more consistent forms of support and solidarity from international democratic actors will be needed.

The report highlights some regional trends that were observed during 2019.

The Americas experienced a series of mass protests in 2019, with many violent clashes between protesters and security forces. Political rights and civil liberties declined overall in Asia, where authoritarian rulers put in place several practices to flout fundamental rights, such as fabricating criminal cases against opposition leaders or performing mass persecution of religious and ethnic minorities. Eurasia has long been one of the worst-performing regions in Freedom in the World, where different types of stage-managed elections succeeded in extending the life of several regimes. In Middle East and North Africa elections are rare, rigged, or indefinitely postponed. Tunisia is the only Free country in the region other than Israel, and it was also the only country to earn a score improvement for the year. In West Africa, setbacks for democracies accelerated in 2019, while East and Southern Africa presented more of a mixed picture, where some countries experienced a shrinkage of civic and political space, but at the same time some authoritarian states proceeded with tenuous reforms.

Europe, historically the best-performing region in Freedom in the World, has been under serious pressure, and illiberal populist leaders and parties maintained or gained power, threatening democratic norms in many EU Member States.

Some recommendations for democracies and for the private sector close the annual report.