Freedom in the World 2022. The Global Expansion of Authoritarian Rule

This booklet is a summary of findings for the 2022 edition of Freedom in the World. The complete analysis including narrative reports on all countries and territories can be found at www.freedomhouse.org 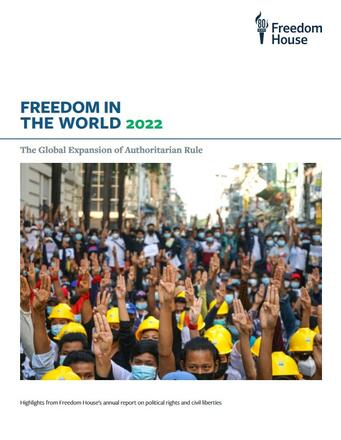 Global freedom faces a dire threat. Around the world, the enemies of liberal democracy—a form of self-government in which human rights are recognized and every individual is entitled to equal treatment under law—are accelerating their attacks. Authoritarian regimes have become more effective at co-opting or circumventing the norms and institutions meant to support basic liberties, and at providing aid to others who wish to do the same. In countries with long-established democracies, internal forces have exploited the shortcomings in their systems, distorting national politics to promote hatred, violence, and unbridled power. Those countries that have struggled in the space between democracy and authoritarianism, meanwhile, are increasingly tilting toward the latter. The global order is nearing a tipping point, and if democracy’s defenders do not work together to help guarantee freedom for all people, the authoritarian model will prevail.

Here the video of the report launch.