Freedom of Expression, Media and Information in Kosovo 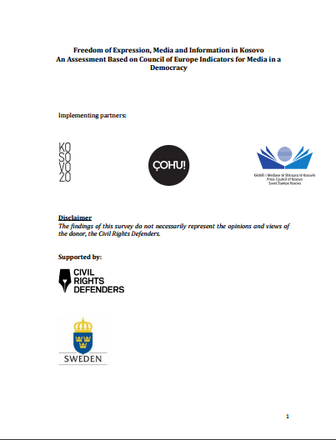 The Parliamentary Assembly of the Council of Europe in 2008 decided to provide some “Indicators for media in a democracy”. The indicators seek to establish a range of principles in order to facilitate analysis of national media environments in respect of media freedom, which may identify potential problems or shortcomings so to enable member states to discuss problems and possible solutions at the European level.

Although Kosovo is not a member of the Council of Europe, it has unilaterally accepted that it will adhere to all internationally recognized standards with regard to human rights, including freedom of expression, media and information. In 2015, Kosovo 2.0, Çohu!, and Press Council of Kosovo (PCK) undertook this project to apply “The Indicators for Media in a Democracy,” in order to measure and evaluate the conditions of media freedom in Kosovo. The indicators have been organized within three overarching themes: Freedom of Expression and Information, The Legislative and Regulatory Framework, and Independence, Security and Transparency

This report uses the indicators provided by the Council of Europe with the aim to consider and analyze the media landscape in Kosovo. Once the methodology used has been elaborated on and a brief update on the current media landscape provided, the report is split into three parts. In the first part, it considers all those indicators that specifically focus on freedom of the media and information by looking at the rights, possible restrictions, differential treatment and coverage of these issues by relevant institutions. In the second part, the report focuses on the legislative and regulatory framework by considering regulation of media including self-regulation, regulatory authorities and codes of conduct for journalists. The third part of the report delves into independence, security and transparency, which cover the freedoms and protections for journalists, working conditions for journalists, as well as the role of private media and state media. Following comprehensive analysis of the situation in Kosovo by focusing on the indicators, a number of conclusions are drawn and recommendations provided.

The authors concluded that some progress has been made over the years, but overall challenges remain. Public institutions and various agencies are not particularly open toward the media. Intervention from individuals in politics remains the greatest barrier toward implementation of freedom of expression and information. The Kosovo Assembly has not implemented a rightful legislation towards media. With regard to media ownership, newspapers offer greater transparency by publishing information about ownership and editorial staff. Meanwhile, television and online media remain heavily problematic. In the end, inadequate working contracts, which lack sufficient social protection, compromise the impartiality and independence of journalists.

Other information at Kosovo 2.0