The Media and Law Studies Association (MLSA) and International Press Institute (IPI) prepared this report to provide a larger set of data on the Turkish court system in relation to freedom of expression trials. The data that is provided also aims to show the ECtHR and other relevant bodies that Turkey’s judicial system is far from being effective, speedy, or efficient 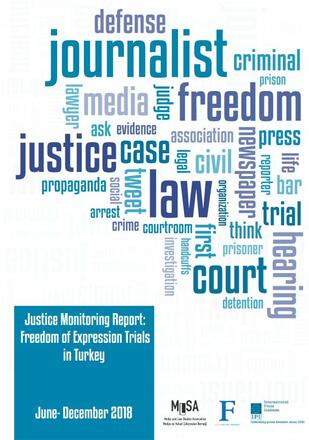 The report provides a snapshot of the Turkish judiciary that has come about after the coup attempt on 15 July 2016. The data provided in the report draws from 90 court sessions in 82 hearings of 71 separate trials, all evaluated on the basis of a standard form prepared by the International Press Institute (IPI) and Media and Law Studies Association’s (MLSA) Legal Unit. This work includes findings from trials monitored as part of the Justice Monitoring Project, supported by the Friedrich Naumann Stiftung (FNST) and conducted by MLSA in collaboration with the International Press Institute (IPI) in Turkey in the second half of 2018.

The defendants in these trials consisted of journalists, lawyers, academics, and politicians. Thirty trained trial observers monitored 90 sessions were held in 10 different provinces of Turkey between 1 June 2018 and 31 December 2018.

In 51% of the legal sessions (46 out of 90) either national or international observers were also present in the courtroom to monitor the hearings.

The report consists in six sections: the executive summary; background and methodology; findings; inside the courtroom; further legal commentary on violations; other activities undertaken in the project. The study highlights most frequent and systematic forms of violation of the right to a fair trial.

The following are among the main findings of the report:

The report also provides more elaborate legal explanations regarding the violations observed in these trials concerning unlawful arrest; long detention periods; defendants not being brought to court physically; changes to panel of judges; handcuffs; deliberations taking place in private; trial sessions being open to public; the panel's disrespectful conduct toward the defendants.

The authors stress that the results of the monitoring show that Turkish courts remain below the domestic and international standards set for securing the right to a fair trial, protected under the European Convention on Human Rights (ECHR).

Moreover, these findings indicate that Turkish courts consistently ignore the Constitution and domestic legislation, as well as the international conventions to which Turkey is a party and precedent rulings from international courts.

Full report can be read both in English and in Turkish.