Freedom of media in the Western Balkans

This report commissioned by the European Parliament analyses media freedom and pluralism in the Western Balkans in light of the EU enlargement policy, providing region-wide monitoring as well as country-specific profiles 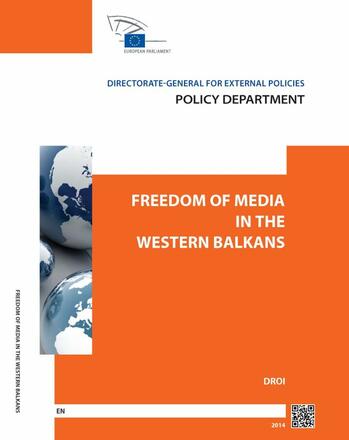 The study analyses media freedom and pluralism in the Western Balkans (Albania, Bosnia and Herzegovina, Kosovo, Montenegro, the former Yugoslav Republic of Macedonia and Serbia) in light of the EU enlargement policy. Despite the different stages of their EU accession paths, these countries share similar challenges, even if they are of different intensities. The study analyses the overall legal framework and its unsatisfactory levels of implementation, the role and the independence of PSB, the media market, and the status of journalists. It also outlines country-specific profiles, regarding these categories. The paper outlines and analyses the current EU policies and financial instruments to foster media freedom and media pluralism in the region, including the Stabilisation and Association Process and specific acquis. It also analyses the issues in the context of the EU ‘internal’ and ‘external’ policy on media freedom and media pluralism. The study outlines the complementary roles of the CoE and the OSCE as setting common standards on media freedom in Europe and the EU institutions as being the main engine and guarantor for their implementation. Finally, the recommendations point towards the EU establishing a more long-term, integrated and comprehensive strategy of external help, monitoring and capacity building, as well as further co-ordination with the CoE and OSCE.