Freedom of the Net 2017: Manipulating Social Media to Undermine Democracy

A comprehensive study of internet freedom in 65 countries, covering 87 percent of the world’s internet users: Freedom of the Net warns that governments around the world have dramatically increased their efforts to manipulate information on social media over the past year 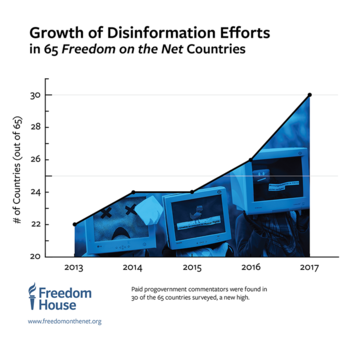 Online content manipulation contributed to the seventh consecutive year of overall decline in internet freedom in 2016. While the Chinese and Russian regimes pioneered the use of surreptitious methods to distort online discussions and suppress dissent, the practice has since gone global.

As displayed in the Country scores  table, nearly half of the 65 countries assessed in Freedom on the Net 2017 experienced a decline during the coverage period.

A record number of governments have restricted mobile internet service for political or security reasons, often in areas populated by ethnic or religious minorities. In the 2017 edition, 19 out of 65 countries tracked by Freedom on the Net had at least one network shutdown during the coverage period, up from 13 countries in the 2016 edition and 7 countries in the 2015 edition. For the third consecutive year, China was the world’s worst abuser of internet freedom, followed by Syria and Ethiopia.

The number of governments attempting to control online discussions - with bots, propaganda producers, and fake news outlets exploiting social media and search algorithms to ensure high visibility - is on the rise. Online manipulation and disinformation tactics based on “fake news” and automated “bot” accounts played an important role in elections in at least 18 countries over the past year, including the United States.

This form of interference remains difficult to detect and combat. The report highlights the steps which are considered necessary to counter this phenomenon:

* public education aimed at teaching citizens how to detect fake or misleading news and commentary;

* strengthening of regulations in order to ensure that political advertising is at least as transparent online as it is offline;

* tech companies should do their part by re-examining the algorithms behind news curation and more proactively disabling bots and fake accounts that are used for antidemocratic ends.