Freedom of the Press in Turkey: Far worse than you think

The report gives an overview on the situation of journalists in Turkey and in exile, sheding light on the developments following 2016 coup attempt 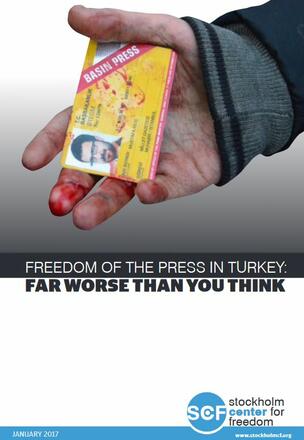 Almost 300 journalists in Turkey are languishing behind bars or facing outstanding arrest warrants as a consequence of the unprecedented crackdown against media following the coup attempt in Turkey.

The Stockholm Center for Freedom, set up by journalists forced to live outside Turkey because of the current situation in the country, has documented individual cases of 191 journalists who are either convicted and serving time in prison or jailed in pre-trial detention. Along with them, 92 journalists are currently wanted for an arrest but remain at large either in Turkey or abroad.

Virtually all of the journalists under arrest were charged with "membership in a terrorist organization", "spreading terrorist propaganda", "attempting to overthrow the current government" or espionage.

The condition of prisoned journalists are inhumane and the accuses they face are arbitrary. After the coup, different deprivations of rights of prisoners considered as psychological torture have been established.

For journalists in exile, personal safety is still at risk because in some cases, pictures and personal information about them was published and they see themselves faced by threats, often coming from the Turkish diaspora.

Imprisonment, exile and censorship are the strategies deployed by the regime to suffocate the watchdog role of media and journalism, exactly what would be much needed for the time being.