Freedom of the press in 2014. Harsh laws and violence drive global decline

Freedom of the Press 2015, the latest edition of an annual report published by Freedom House since 1980, highlights the sharp worsening of media freedom in 2014, as journalists around the world faced mounting restrictions on the free flow of news and information— including grave threats to their own lives 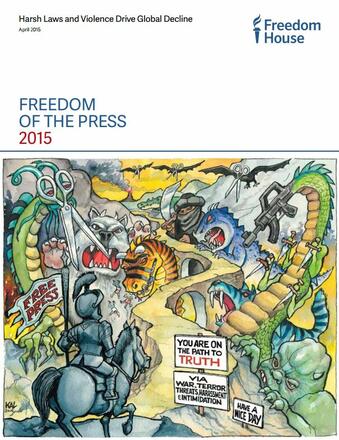 The report found that worldwide conditions of media freedom deteriorated sharply in 2014, reaching the lowest point in ten years. Only 14% of world population enjoy fair press conditions, with Eurasia suffering the sharpest regional decline. Most worrisome deteriorations relate to the abuse of restrictive laws against the press — often on national security grounds — and the mounting restrictions for journalists to physically access and report especially in conflict or protest areas. Countries with significant declines increasingly outnumber those with significant gains. The steepest declines worldwide relate to two factors: the passage and use of restrictive laws against the press—often on national security grounds—and the ability of local and foreign journalists to physically access and report freely from a given country, including protest sites and conflict areas. Paradoxically, in a time of seemingly unlimited access to information and new methods of content delivery, more and more areas of the world are becoming virtually inaccessible to journalists. While there were positive developments in some countries, the dominant global trend was negative. The number of countries with significant improvements (8) was the lowest since 2009, while the number with significant declines (18) was the highest in 7 years. The 18 countries and territories that declined represented a politically diverse cross-section—including Greece, Hong Kong, Iceland, Serbia, and South Africa—indicating that the global deterioration in press freedom is not limited to autocracies or war zones.