Published in November 2016, the Freedom House report analyses major developments in the field of information dissemination, particularly during anti-governmental protests 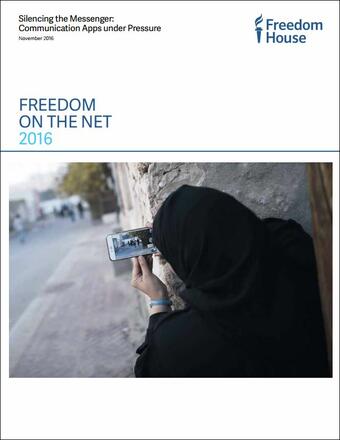 According to the report, in the past year, social media platforms, communication apps, and their users faced greater threats than ever before in an apparent backlash against growing citizen engagement, particularly during politically sensitive times. Of the 65 countries assessed, governments in 24 impeded access to social media and communication tools, up from 15 the previous year. Governments in 15 countries temporarily shut down access to the entire internet or mobile phone networks, sometimes solely to prevent users from disseminating information through social media. Meanwhile, the crackdown on users for their activities on social media or messaging apps reached new heights as arrests and punishments intensified.

The report states that Internet freedom has declined for the sixth consecutive year, with more governments than ever before targeting social media and communication apps as a means of halting the rapid dissemination of information, particularly during antigovernment protests.

It stresses that public-facing social media platforms like Facebook and Twitter have been subject to growing censorship for several years, but in a new trend, governments increasingly target messaging and voice communication apps such as WhatsApp and Telegram. These services are able to spread information and connect users quickly and securely, making it more difficult for authorities to control the information landscape or conduct surveillance. China is presented as the year’s worst abuser of internet freedom.