Although Internet freedom in Turkey has been gradually decreasing over the last years, it went through a sharp decline in 2017 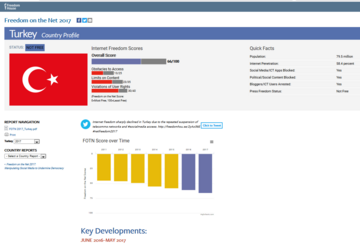 The report covers the period between June 2016 and May 2017. Over these 12 months and against the backdrop of several terrorist attacks, the July 2016 coup attempt and the state of emergency that was declared soon afterwards, the Turkish government repeatedly limited or blocked access to Internet pages and social media platforms, mainly on national security grounds. Turkey’s overall score for 2017 is 66/100 with a decline of 5 points compared to the previous year.

The ongoing tension between the government and the Kurdish political movement has led to several episodes of Internet shutdowns. Twelve million residents of the southeastern region of Turkey, where there is a high concentration of ethnic Kurds, suffered from two major Internet shutdowns in September and October 2016, in relation to the removal of 28 Kurdish mayors by the central government and the arrest of several local politicians. Shutting down telecommunications networks during security operations has been another frequent practice, mainly in the southeastern regions.

Three social media platforms, one website (Facebook, Twitter; Youtube; Eksi Sozluk) and one instant messaging service (Whatsapp) were temporarily blocked or throttled in 7 occasions: two terrorist attacks in Istanbul and Gaziantep; the attempted military coup; the arrest of 11 members of the pro-kurdish party HDP; the murder of Russian Ambassador Andrey Karlov; the distribution of the footage showing two Turkish soldiers burned alive by ISIS; and one episode that could not be identified with certainty.

After the assassination of the Russian Ambassador a judge ordered the blocking of over 100 URLs related to the assassination,  including the news site of the Dutch Broadcast Foundation (NOS).

The overall number of blocked websites has also increased. As of November 2016 more than 114.000 websites were inaccessible. The presence of “obscenity” is the reason why over 90% of these sites were blocked. These  include several websites related to the LGBT (Lesbian, Gay, Bisexual and Transgender). Websites “defaming Islam”, including sites promoting atheism, are also blocked.

Engelliweb, the Turkish website providing a list of the blocked sites and its related social media accounts were lately shut down without an explanation.

The increase in the number of news sites (especially those having a critical stance towards the government) that have been blocked by Turkish authorities represent the most recent trend in censored content. Access to at least 17 news sites has been blocked during the coverage period.

On March 2016 the Gülen-linked newspapers Zaman and Today’s Zaman, as well as Cihan News Agency, were seized and the the online archives of each paper as well as their Twitter activities were deleted.

Wikipedia has been permanently blocked since May 2017 due to two articles related to Turkey’s role in the Syrian civil war. On the other hand, several blogs and websites questioning Turkish Politics and leaders have started to appear, although many of them have also been blocked. The bans are ordered in most of cases by TIB (Telecommunication and Communication Presidency) and its successor BTK (the Information and Communication Technologies Authority) rather than by the courts. The opaqueness of the blocking procedures makes it difficult to appeal the decisions.

A number of file hosting services (Dropbox, OneDrive, GitHub, Google Drive, and Internet Archive) were temporarily blocked on October 2016 after they were used by the Turkish hackers group Red Hack to leak private email exchanges of Berat Albayrak, Turkish Energy minister and son-in-law of president Tayyip Erdogan. On the same occasion the Redhack related Twitter account was also blocked by Turkish authorities, and news related to the leaking were banned.

There have also been frequent requests by Turkish authorities to delete or remove content addressed to social media platforms and Turkish websites, including several user-generated content websites (Ekşi Sözlük, İnci Sözlük and İTÜ Sözlük). Turkey accounted for 65 percent of all user accounts reported to Twitter for the period of June 2016 to May 2017.

As of mid-2017, the pro-government newspaper Sabah had the most visited news site in the country. Many citizens, including journalists and political activists, have been targeted for nonviolent speech that is critical of the government or touches on controversial issues like Kurdish identity. Several people were charged and detained for their comments on government and president Recep Tayyip Erdogan because the comments were deemed offensive.

Prison sentences for online speech have been rare, however several individuals were sentenced to lengthy terms for allegedly insulting public officials or spreading terrorist propaganda. The comments posted on social media were used in court as evidence against them. Self-censorship is widespread among social media users, due to the steep rise in prosecutions under the charge of defaming the president.

Tens of thousands of Turkish citizens have been arbitrarily detained for their alleged use of the encrypted communications app ByLock, a widely diffused application which according to Turkish authorities is symptomatic of being a member of the Gülen movement.

At least 10 VPN services as well of the circumvention tool Tor were banned in November 2016.

Citizen journalism and volunteer reporting have recently gained traction. Examples include 140journos , dokuz8haber , and Ötekilerin Postası , whose editor was arrested in November 2015.

Digital activism, which has played a significant role in 2013 Gezi Park protests, has been waning due to the repressive climate after the coup. Nonetheless it still represents one of the most important tools for critical information. At the same time, an “army of trolls” - around 6000 individuals previously revealed by a number of reports - has been enrolled by the ruling AKP to advocate for certain agendas (both national and international) and manipulate discussions, while countering critical narratives and weaken protest movements on social media.

Although the constitution seeks to guarantee the right to privacy there are limitations on the use of encryption devices, and surveillance by security agencies is believed to be widespread.